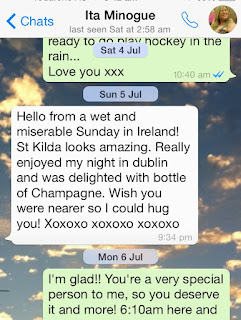 I don't know what to say. I'm in denial one minute and crying my eyes out the next. What the hell is happening right now??!

How was I speaking to you only 3 weeks ago and now I'm sitting in my house watching the clock as I know they're about to lay you to rest right now as I type this?!. How is it that 3 weeks ago you were texting me to say thanks for some birthday champagne that I'd surprised you with, and now I'll never get to speak to you again? How is it fair that I'll never get to say goodbye to you or ever get over the guilt of it?


You know that person that you hear about on TV or on Facebook or something; the one who is like a walking saint, always putting the needs of others before themselves? The one who is suffering immensely but doesn't show it in front of others? The one who has a smile on their face even though they are in pain on the inside? 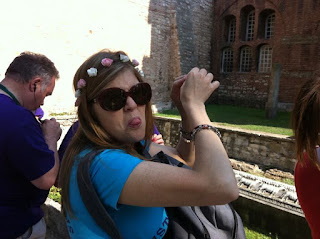 You know the friend or relative you have who you only need to think about and you have a smile on your face? The one who cannot be described in words but rather from the feelings you get from that person? The one who hasn't got an enemy in the world?

What about that person you hear about who doesn't let anything get them down? The one who is consistently positive despite the massive obstacles that life puts in their way? Or the person who completes more in their forty years that you could in one hundred?

Well that person was my friend Ita.

Ita Minogue, my little pixie. I can still hear your cheeky giggle in my ears. The hospital wanted her in last Friday week and she refused, saying she'll be in on the Monday as she was still partying! That's my girl - the life and soul of the party despite the fact that she was drowning on the inside. Irrespective of the fact that she was on a transplant list, on dialysis every second day, was constantly in and out of hospital for weeks on end, took about thirty tablets the size of horse tranquilisers a day - this beautiful little star would ask how your day was and would want to talk about you.

You know, we never spoke about it. Never let it be what defined her. Never gave it a name. And to be honest, most of the time I would forget about it. Even when she was hooked up to her nebuliser or the dialysis machine (which took up half of her room), we chatted about how I had a cold and was feeling sorry for myself, or how work was stressing me out or about some man-drama I was having. Which was clearly more important...and perhaps a good distraction from what was slowly trying to take over her. Maybe she wanted it that way, or maybe it was because she was so good at fighting that I forgot she was suffering.

I knew it was serious. I knew that if you had it, the odds weren't good. Ireland has some of the most severe strains of it and also has the highest incidence (per head of population) of it in the world; with three times the rate of the US and the rest of the EU.

I knew the impact of it can vary from one person to another. I had seen that some people with it live only until their teens and there are others that live in to their 50's.

It had already taken three people I knew by the time I was twenty-nine. This was number four. Ita had just turned forty. 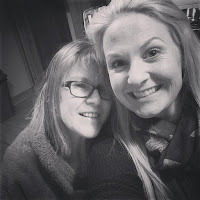 My last physical memories of Ita were sitting on her couch in Co. Clare last Christmas when I went home, eating way too many wine gums before dinner and chatting on the times gone by. We were laughing about the trip to Turkey where we met in 2011, how things have changed since then and wondering about what things would be like in another three or four years. Little did we know seven months later was all it would be before things would change forever. 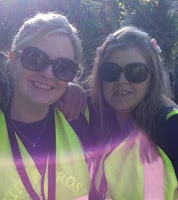 Ita liked the new boots I had bought, so she quickly bought a pair online before Francis, her husband, could see! She gave me a pair of beautiful earrings and we took a selfie to go in my "Day-by-Day" Facebook Status account of what I did when I went home. It was a very stormy day that day and Ita was quick to try and rush me home to Meath as soon as I'd had my dinner, for fear something would happen to me on the way back. She was barely able to walk about the house, yet was worrying about me. The little minx was asking me what date I was flying back to Melbourne after Christmas. I knew her plan -  she was trying to find out a date so she could see me off at Dublin Airport; a four hour drive away! I wouldn't tell her and so I drove off beeping and waving goodbye to her as she stood in the front doorway of her house, waving frantically in her dressing gown, smiling from ear to ear. 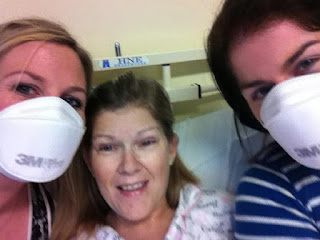 So I'm in Townsville on the weekend visiting my sister, my Dad (who is over visiting her) and my niece. I get up and check Facebook and within five minutes of logging on I have messages from Ita's husband and four other friends. My sister immediately knows there's something wrong by the expression on my face before I hear anything. I have a sickening feeling in my stomach because I know, before anything is said, the main connection between these five people and me is Ita and this deadly disease. I know what they're going to say. And then I read it, and re-read it and again a third time before I start to accept what they're telling me. In that split second, I feel a part of my heart literally break.

How considerate some people are. In such an emotional and heartbreaking time, these people thought to notify me and let me know of the sad news. I am so grateful and it's another credit to Ita in the circle of friends and family that she had around her. In a haze, I immediately start looking up flights to go home, and it's right then that I am overwhelmed with an irrational sense of hatred towards Australia and how far away from home it is. Even if I were to board a flight back to Melbourne that day I wouldn't make it back to Ireland in time for the Wake, removal or funeral. I am too far away to get home in time to say goodbye to my friend who is being buried in her party dress from her 40th birthday only weeks ago. 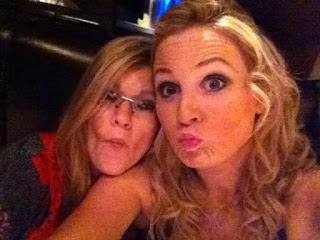 Words can't express the pain in my heart right now. You put up a great fight Ita - at no stage did you let this unrelenting disease beat who you are. Even in death you will shine brighter, not allowing the disease that took your body destroy you. I admire you and your unfailing courage in the face of what would make most crumble. Beautiful, funny & positive to the end; I will always treasure the happy times & aim to live more of a life for you. You will be the brightest star up there. A part of me has gone with you my beautiful Ita. One of the strongest and bravest people I have ever met, your continuous humour and positivity in the face of the insurmountable mountain you had to try climb was inspiring. Constantly thinking about everyone else before yourself, you never ceased to amaze me. You fought hard my little star, now breathe easy and continue to mind us from above. I am absolutely devastated, but so thankful I was special enough to have you as part of my life. I love you Itóg.

And so, in an effort to try to process and deal with this, I decide to take a leaf out of Ita's book. A never-ending flow of positivity and inspiration, I will consciously live as good and full a life as I can for she who can no longer do so. I will try to remember to take every breath as a second chance and not to take anyone for granted. What better way to honour a friend than to make her proud as she shines from above? And in those instances where I forget and fall flat on my face and fail, I know she will be the first one to start laughing. Ita's legacy will continue to live on in the hearts of everyone she touched. So, excuse my language, but fuck you Cystic Fibrosis. Ita was, and always will be, so much bigger than you - you don't get to win this one. 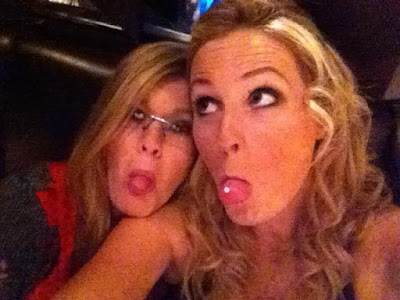 Cystic fibrosis (CF) is an inherited chronic disease that primarily affects the lungs and digestive system of about 1200 children and adults in the Ireland (70,000 worldwide). A defective gene and its protein product cause the body to produce unusually thick, sticky mucus that clogs the lungs and leads to life-threatening lung infections; and obstructs the pancreas and stops natural enzymes from helping the body break down and absorb food.
Visit www.cfireland.ie for more information or to donate towards finding a cure.
Posted by Ciara Sweeney at 18:56