I know I'm biased but there's no denying of the fact that my little brother is a machine.
The facts are there, the stats are in for all to see and I would like to hear someone deny it.

I knew Kev could never sit still growing up. Kev would run down the hall, would run to his room, would have his legs on the table or swinging from the chair. Kev was already red-faced from tearing around the garden or running with his tongue out as he played football.

I knew Kev was fit.  I knew he was nowadays weirdly into fitness, triathlons and random cycles across the entire country, but I don't think that I fully grasped how far he was going to push his body and how far his body would take him. 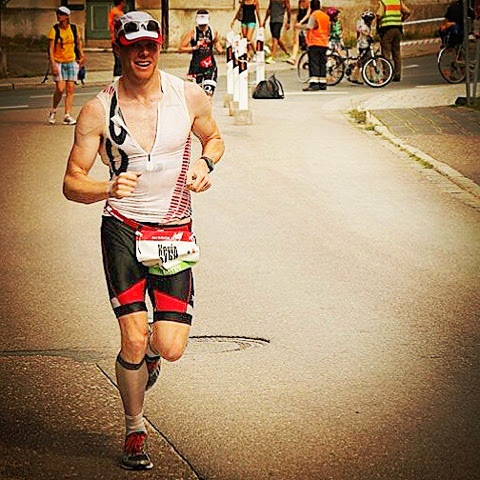 The temperature soared to over 34 degrees Celcius (93.2F) with the water temperature in the canal even reaching 20.2 degree Celcius (68.36F)!
9 months of preparation leaves Kev feeling comfortable throughout the whole race. He completes the swim in 59 mins 16 secs, the 180.25kms of cycling in 5 hours 20 mins 50 secs and the running in 3 hours 26 mins and 23 secs. That's a pace of 4 mins 40 seconds per kilometre for the marathon - after already completing the swimming and cycling beforehand... 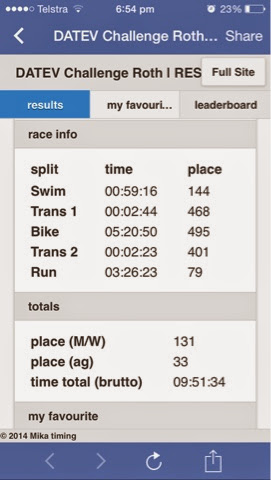 To put this in perspective; Kev didn't stop for 9 hours 51 mins and 34 seconds - about the time it took me to recover from my hangover from the night before. As I said before; we all have our talents... 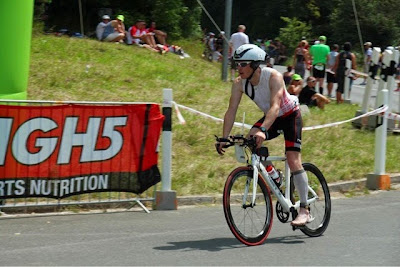 Mam and Dad went to Germany to cheer him on along with some of Kev's friends. After the event I got an email from Mam gushing about how in awe of her son she was. She said, and I quote: "What an achievement for Kevin. I was telling everyone we were going to Germany to support Kevin in his Ironman, not realising what a huge event it was. All I can say is that he is amazing. He went around the different events sometimes with a smile on his face. Even to the point at one time on the bike he shouted "Hi Mam!". The heat was something else. We were absolutely roasted just standing on the side as supporters. I knew he was fit enough to complete the course, but was worried about the heat. I shouldn't have bothered." 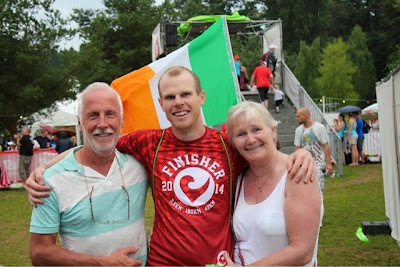 I don't think anyone can truly appreciate the achievement that he has just accomplished. In true Kev-form he didn't boast about it on Facebook, didn't tell anyone in passing if asked "How was your weekend?" or even mention it on our family Whatsapp thread! I would have had it tattooed on my face if I'd have done something like that! I posted his results and photo on his page when I got them and it has already reached 203 "Likes". Posts of congratulations and incredulity flood his Facebook profile and I'm delighted to see that his mammoth efforts have been returned with such praise from friends and family. He deserves every ounce of it and should be able to wear the medal for a year after completing such a task! 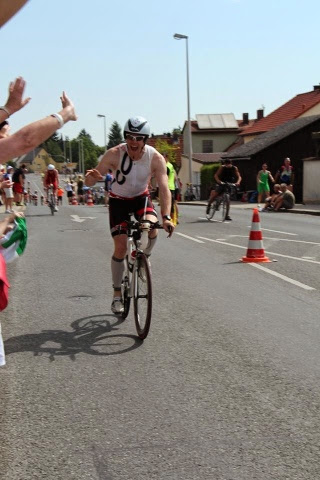 Mam and Dad go to the airport to collect him upon his return from Germany and made him a sign. I can't stop telling everyone I meet about how fantastic my little brother is and marvel at how he is an Elite Athlete. How proud am I?! I can't get enough of reading about how difficult it was and the reviews from others who went. I am beyond inspired and immediately set out on my 12.5km jog in preparation for my Half-Marathon in October. 1 hour 15 mins later I come back sweating and wrecked, smiling about how Kev had almost done his Half-Marathon in that time! 5km the next day and I'm done in and can barely complete hockey training afterwards, so my coach has to have words with me. Clearly I have to reign in my newly inspired unfit self and start with baby-steps!! 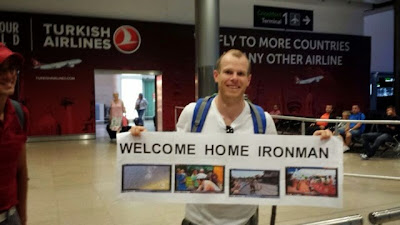 How amazing is the body? To think of, with training, the lengths that you can push it? I find it hard to just physically get out of bed after training late the night before, never mind training every day and to the lengths that some people do. I laugh at how we joke saying Kev would have been diagnosed with ADHD or something if he was born in these times, as he could never sit still and had so much energy. To think about all those years ago when Kev had surgery on his cruciate ligaments and was told that he probably wouldn't be able to do sport again. I remember seeing him white as a sheet on the chair in the hall with his knee in a sickening abnormal sideways position, when he had dislocated it multiple times playing GAA (Gaelic Football).

I smile and wonder if he knows how great he is. I wonder if he realises what he's done and how inspiring he is to others. 131st out of 3,500 participants & 33rd in his age group - unbelievable!!!

As my cousin said "A Doctor and an Elite Athlete - you're not making it easy for the rest of us Sweeneys Kev!"
And in the words of my little sister: "Not everyone is as lucky as we are to be able to say they're actually related to Superman". 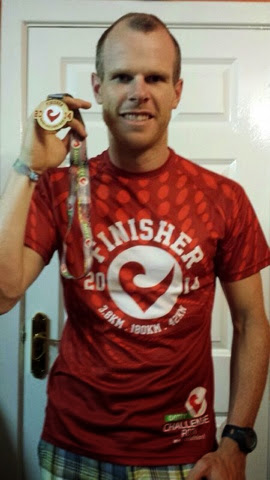 Kev has done his own blog of the day, the preparation, his feelings on the day and the elation of crossing the finish line - please read!! My Ironman

Another emotive post by my friend Jen in The States, who was also inspired by Kev is available here - check it out!!