This blogging thing takes a lot longer than you expect!! I spend some weeks trying to think of anything at all that I did that was worth noting down and then other weeks trying to note everything down so that I don't forget it!!

I got my hair done a couple of days before my birthday night out and was shocked cos of the change (which probably isn't that bad, but is just taking me time to get used to). When I was leaving Shauna's apartment, a homeless man passed me, looked me up and down and shouted "I'm never dating a blonde again!", which obviously did wonders for the confidence in my decision to change the blonde to Ombre/Balayage! 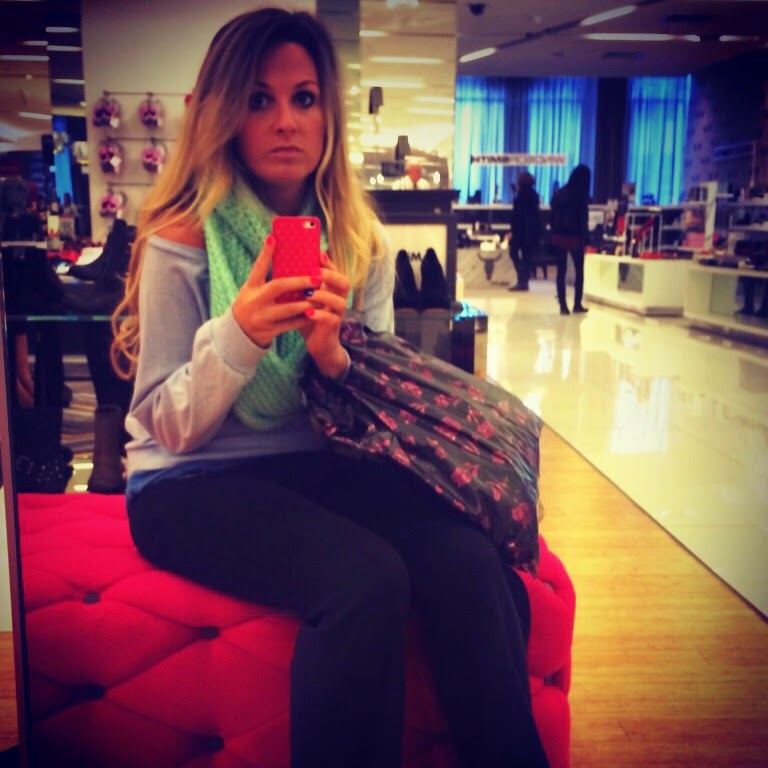 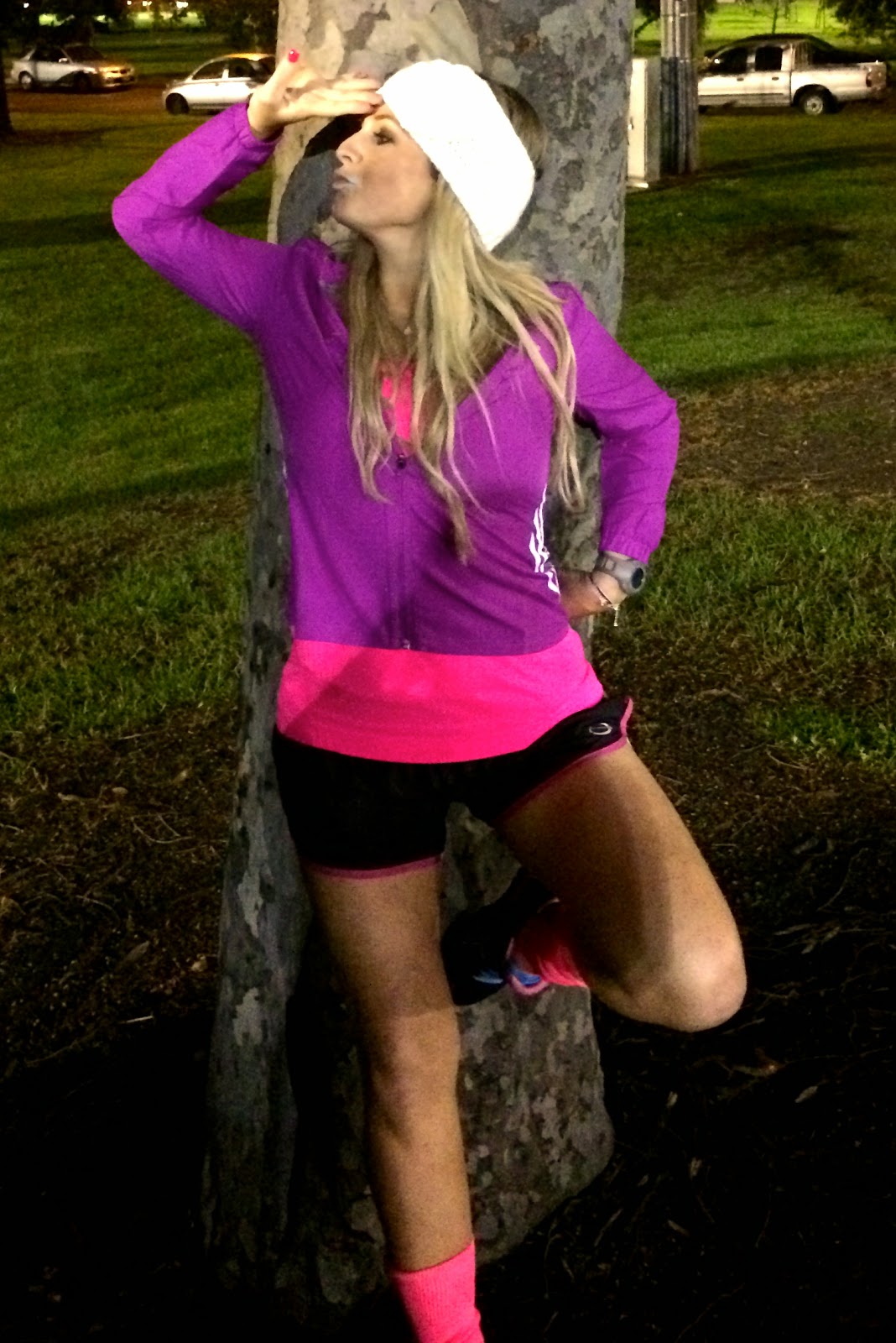 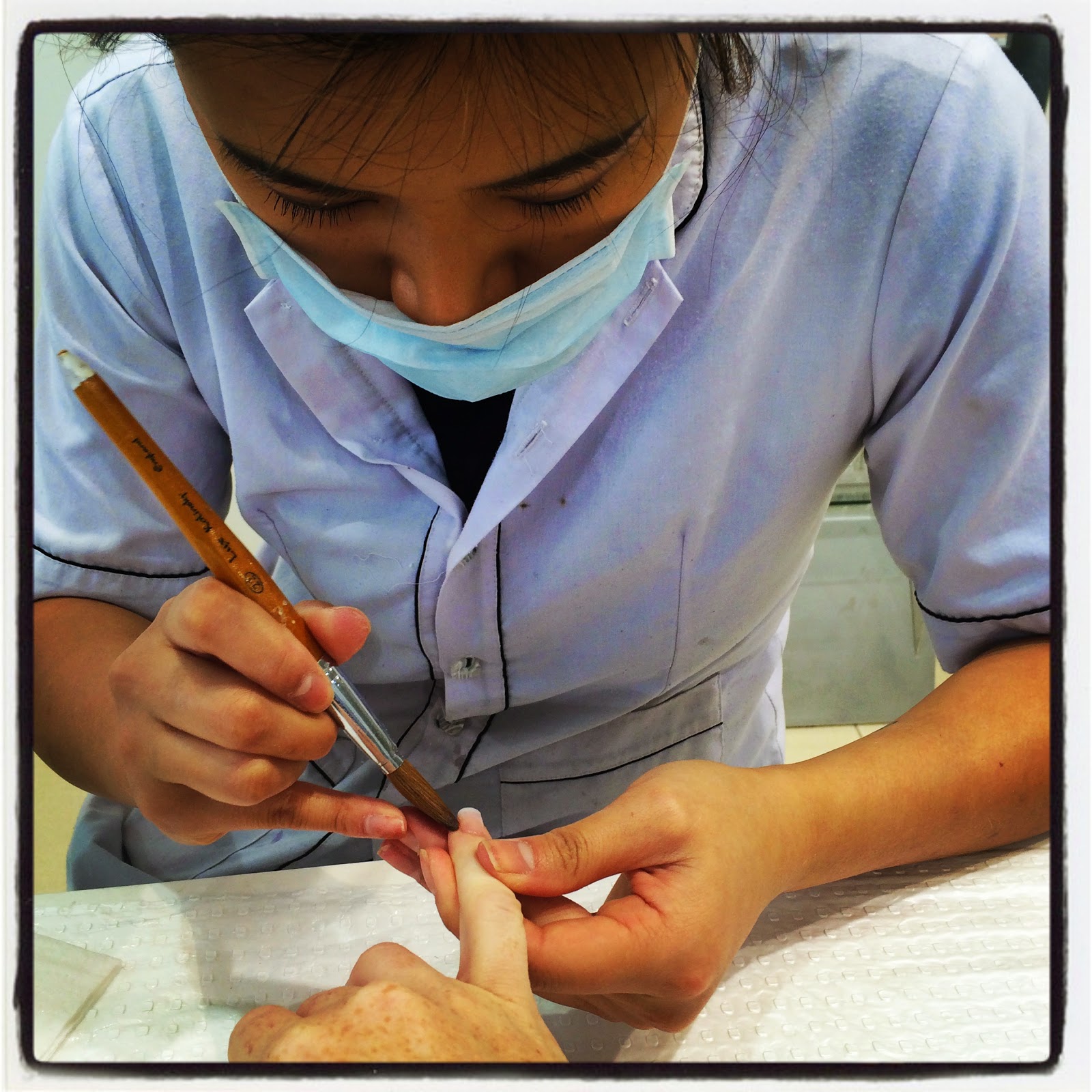 I took the Friday off work as a "present" to myself, and got my nails and tan done. I was in the nail salon getting a pedicure when another nail technician asked me if I'd like the massage chair turned on. I said yes, not realising that I'd be pretty much beaten up while I sat in it! At one stage it was so violent that I had to yell at the assistant to come over and turn it off before I was having to go back to the Osteopath! The Thai lady who was doing my pedicure then proceeding to cut me twice and left a bruise on my shin from her "massage" - I was going to be left worse for wear from this "pamper session"!!
I was getting my manicure done when someone sat beside me to get their nail fixed as they'd chipped it. It was only when I looked sideways that I noticed it was a guy and he was wearing mustard-yellow nail varnish. Now, whatever you're into man, knock yourself out; but at least choose a nice colour!!! 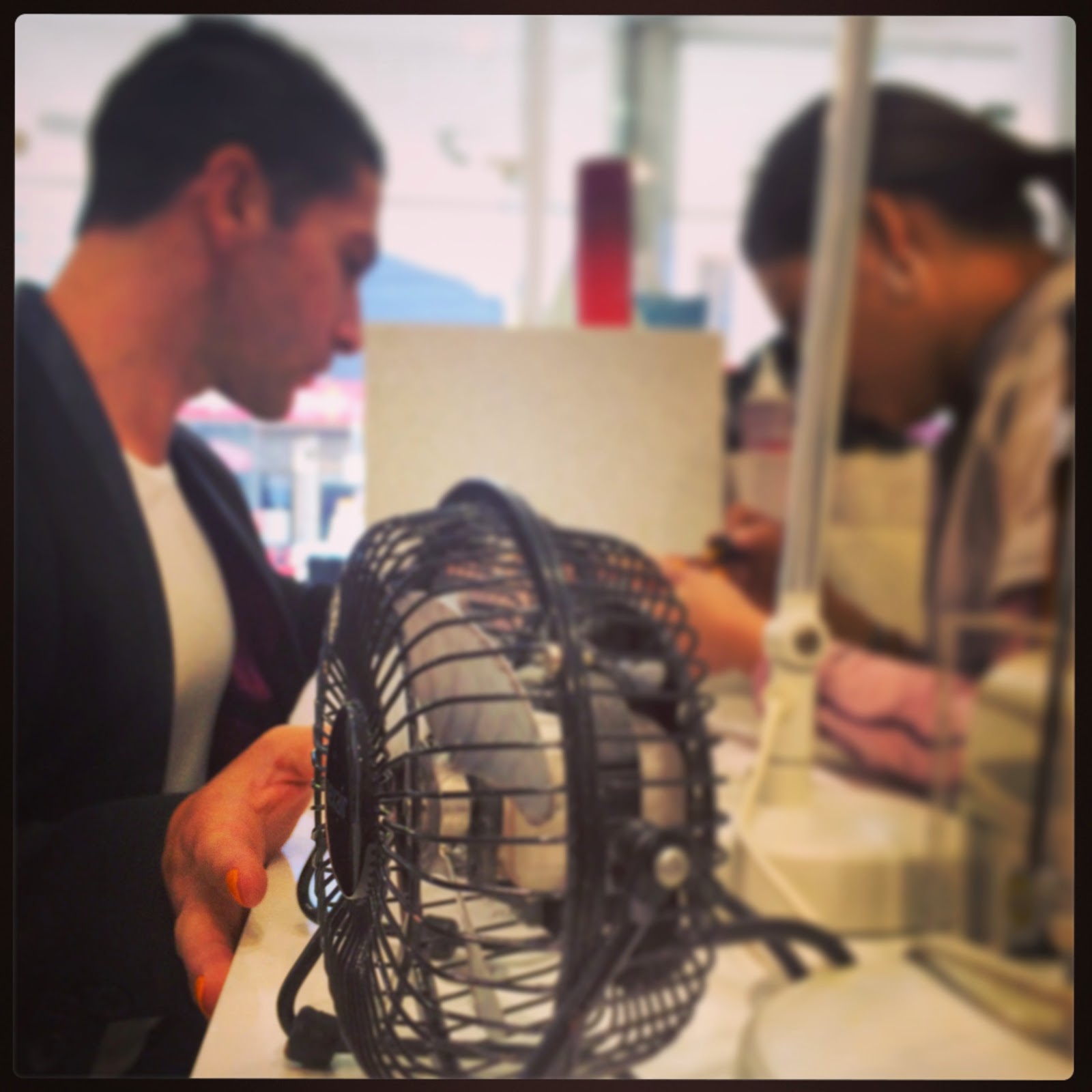 I got my makeup done on the Saturday and was transformed into a completely different person. Oh how I wish I was either rich to be able to afford to get it done all the time or simply good at putting it on! At the moment I'm just grateful that it exists!! 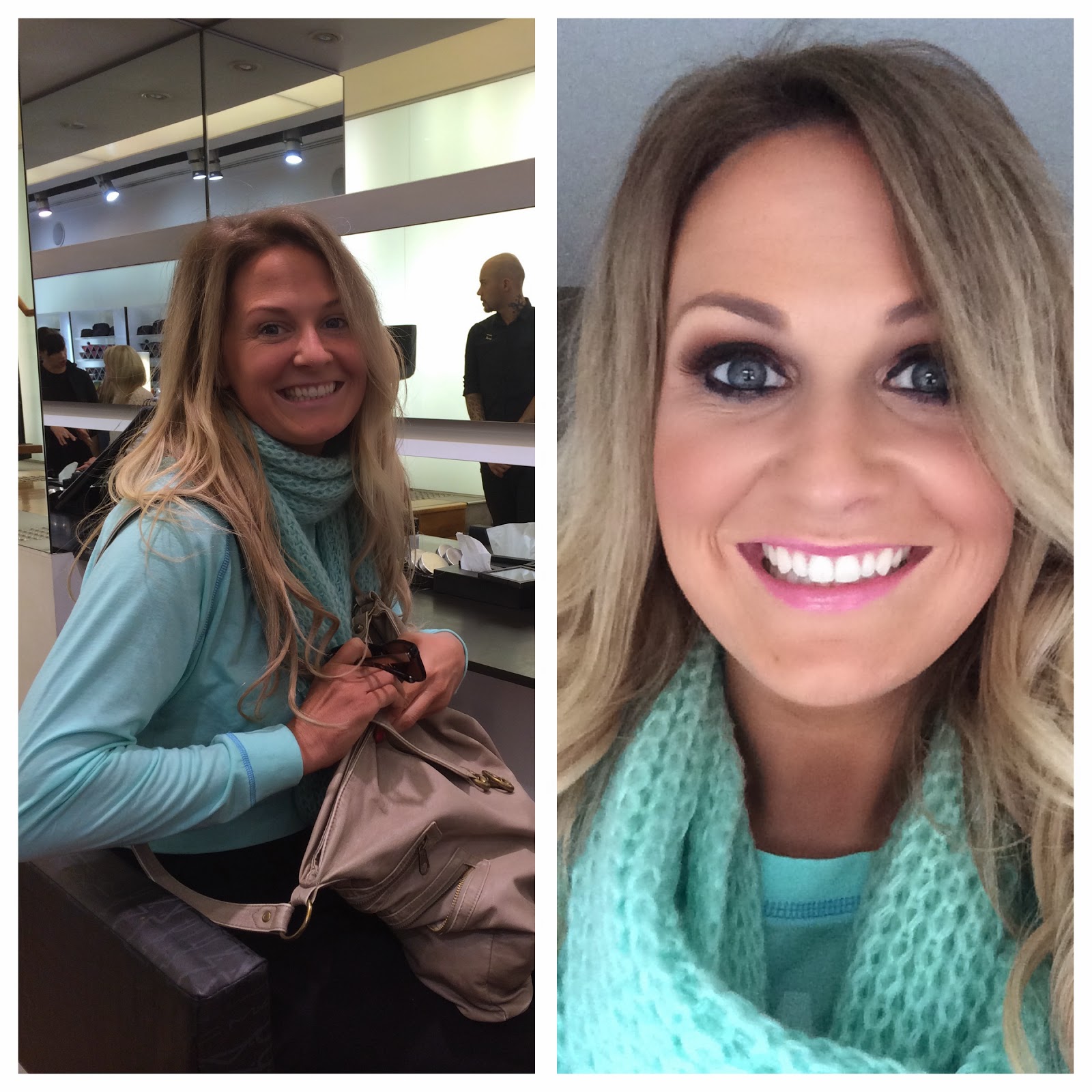 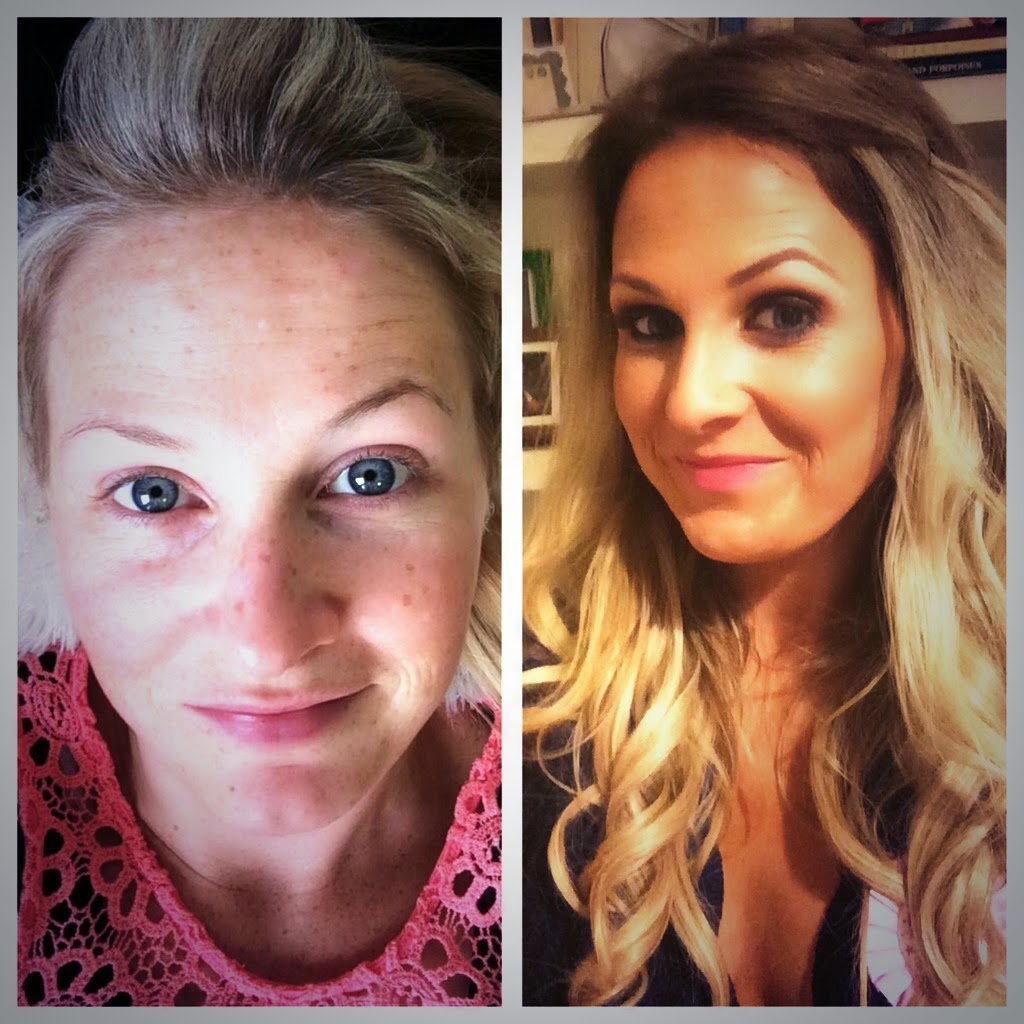 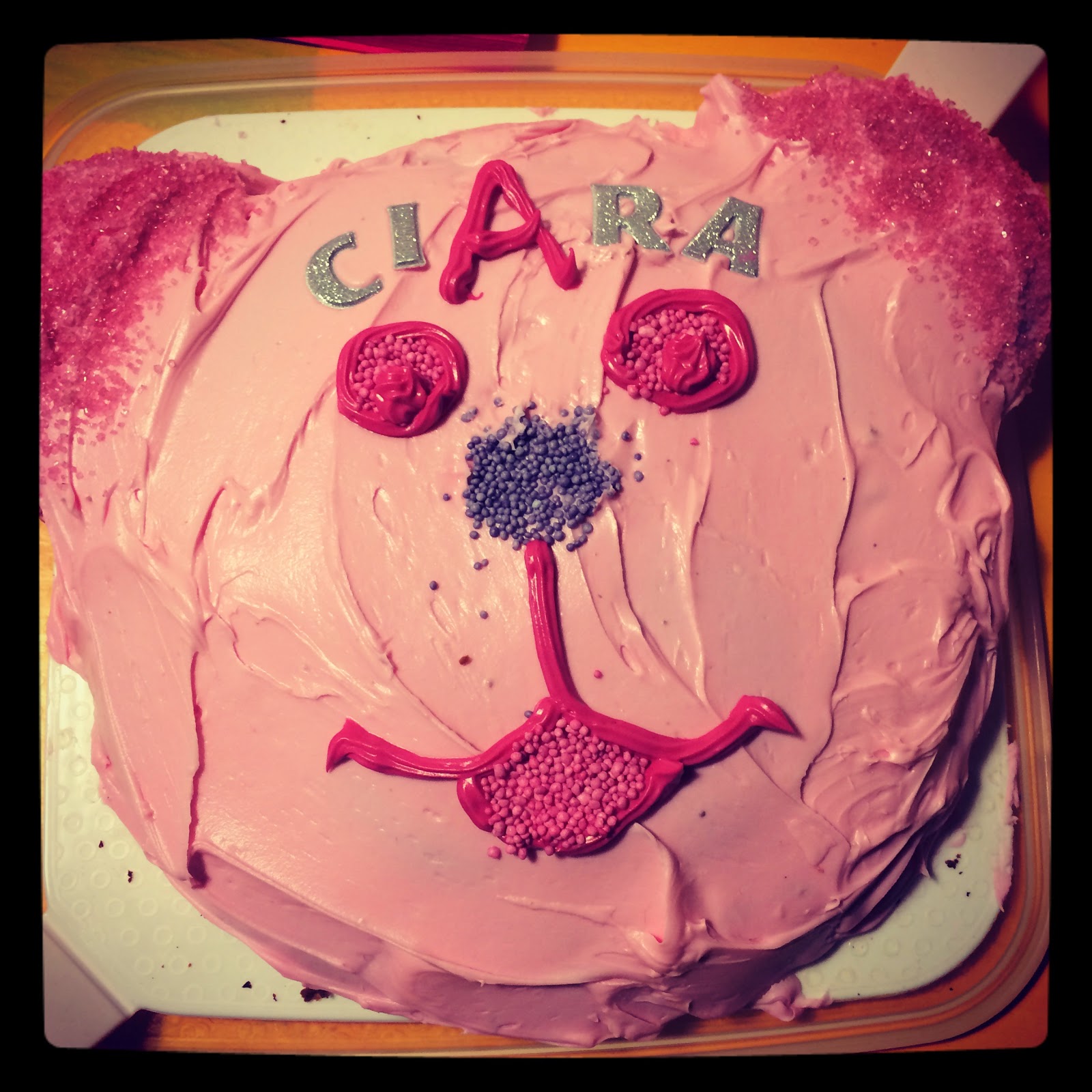 So, Una planned a birthday party at her house - there were pink balloons, pink cups, pink straws; some of which would be normally seen at a Hen Party if you know what I mean? She said she themed it around a 4-year-old's birthday party! :) Emma and Panda made me a pink birthday cake and I was inundated with presents, well wishes, drinks and love. What a way to make a girl feel good! I got over 135 posts on Facebook wishing me a good day, loads of texts, I got loads of presents: hair studs, running gear, chocolate, jewellery, a handbag, wine, clothes, scarves, flowers, beautiful cards and many more things! I was completely and utterly spoiled! 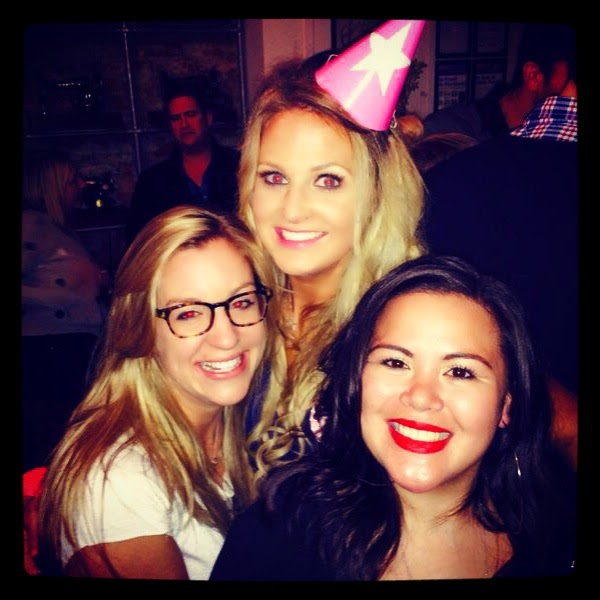 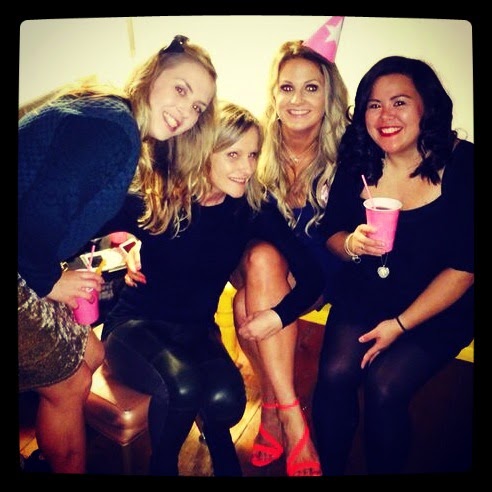 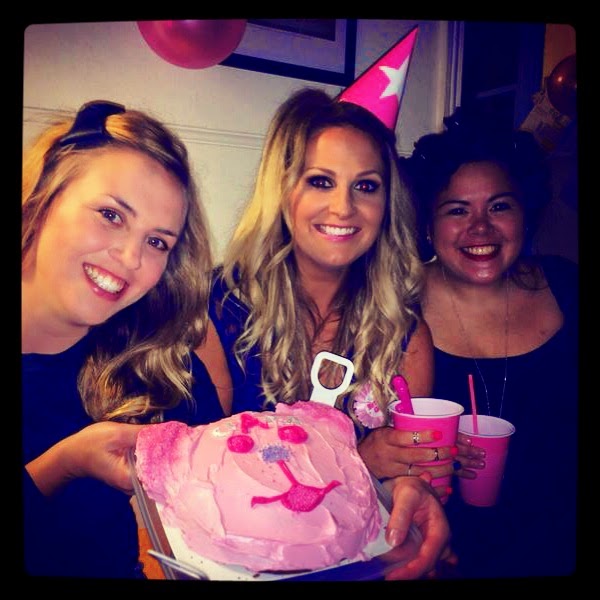 There was about 25 of us at the night - we went to The Wolf and I and from there to Temperance. I managed til about 1:30am in my shoes and then the flip-flops came out (thanks to Emma for bringing them!). I held out til 2:45am and then left. There were mostly guys in Temperance and after our usual "wild animal" antics, I saw many of them with their mouths open and one fella in particular scream out "I F*CKING LOVE HOCKEY!!!!". At least we gained a fan! The majority of the night's activities will remain under wraps though - or I could have a few less friends :) 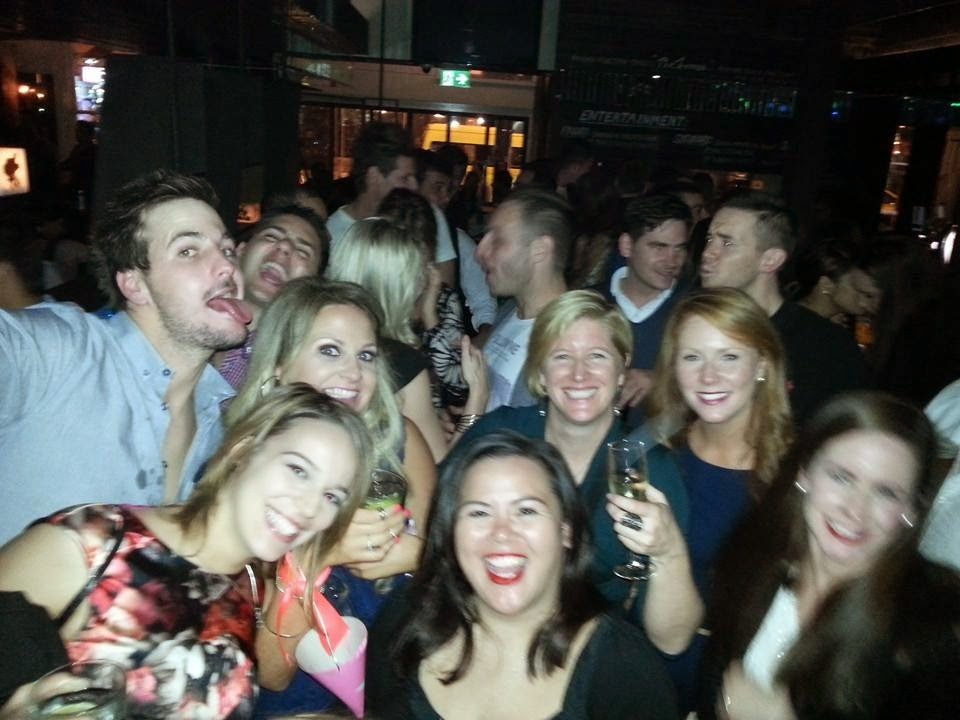 Some of us were thrown out, and some left due to a sudden "illness" - with even a couple not making it cos of a similar illness, but I won't name anyone :) I think we were actually quite tame and did PHSK proud :)

Next day I wake up about 4 hours after going to bed. I stumble to the kitchen, shove 2 Nurofen into my mouth with a slice of bread and wash it down with 2 glasses of water, all the while thinking "I'm dyinggg.....". I decide to check Facebook as I'm trying to get as much water into my body to stop me from imploding due to dehydration and the first post I see is my Dad commenting that my little brother came 2nd in the Double-Olympic Triathalon in Athy.
Ugh.
I think of how proud my parents would be of me right now as I hold onto the countertop to stop the earth from the swaying-thing it's doing. Yet another reason to be thankful for distance and another reason that compounds my assurance in the fact that I must be adopted. 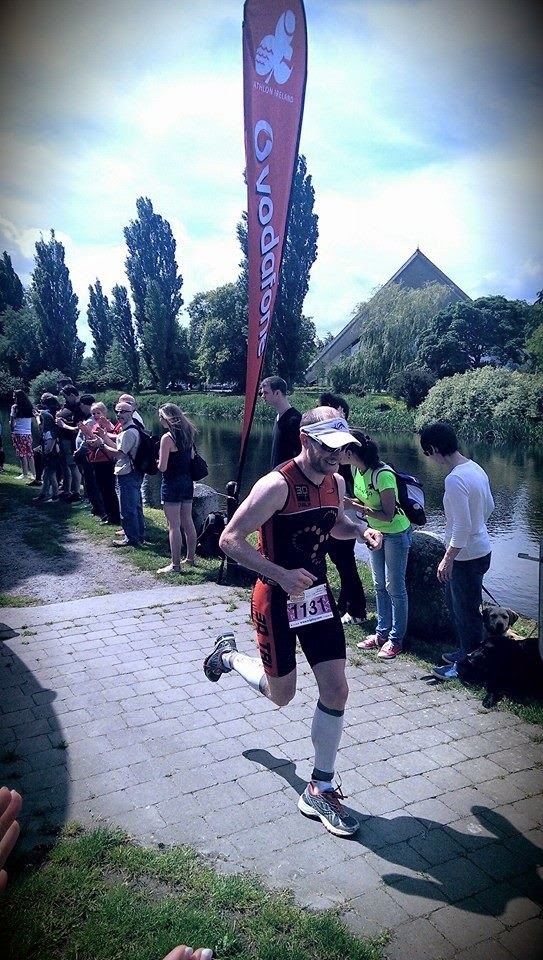 Went for $4 pizza at The Lucky Coq on Thursday evening with some of the hockey girls after a long 13 hour day at work. Cheap wine and cheap pizza never tasted so good! JD and Tilly informed me of the last time they were there; there was a pizza leftover from the people who were there before them and then, after a couple sat beside them on the sofa, the man starts digging into it while he waited for his own order to come?! WHO THE HELL DOES THAT?!?! Gross!!!

Birthday cake at work too - man I'm far from thin (as Dormer likes to constantly remind me), but I think I need to be grateful that I'm not obese considering the amount of my life I spend eating?!?! 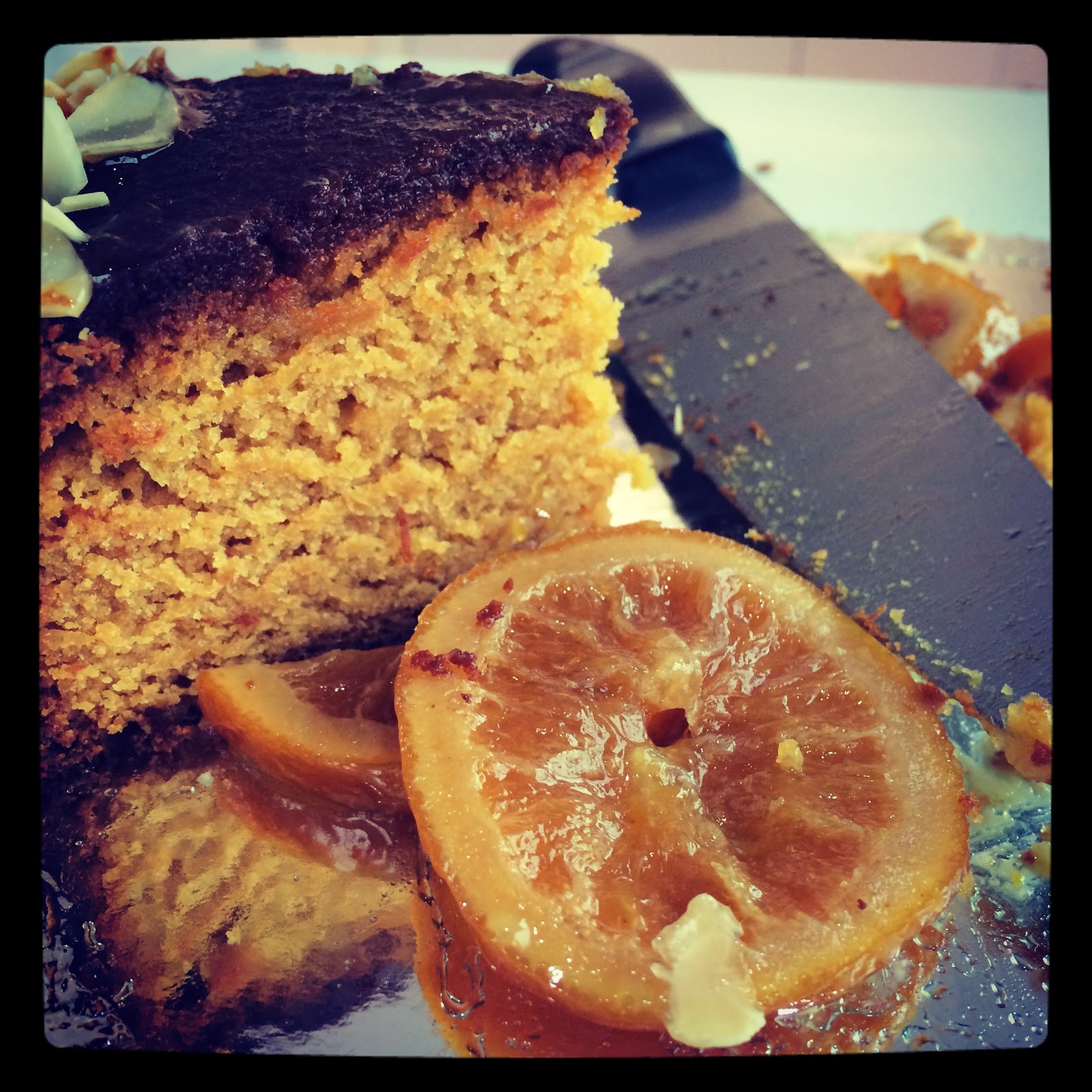 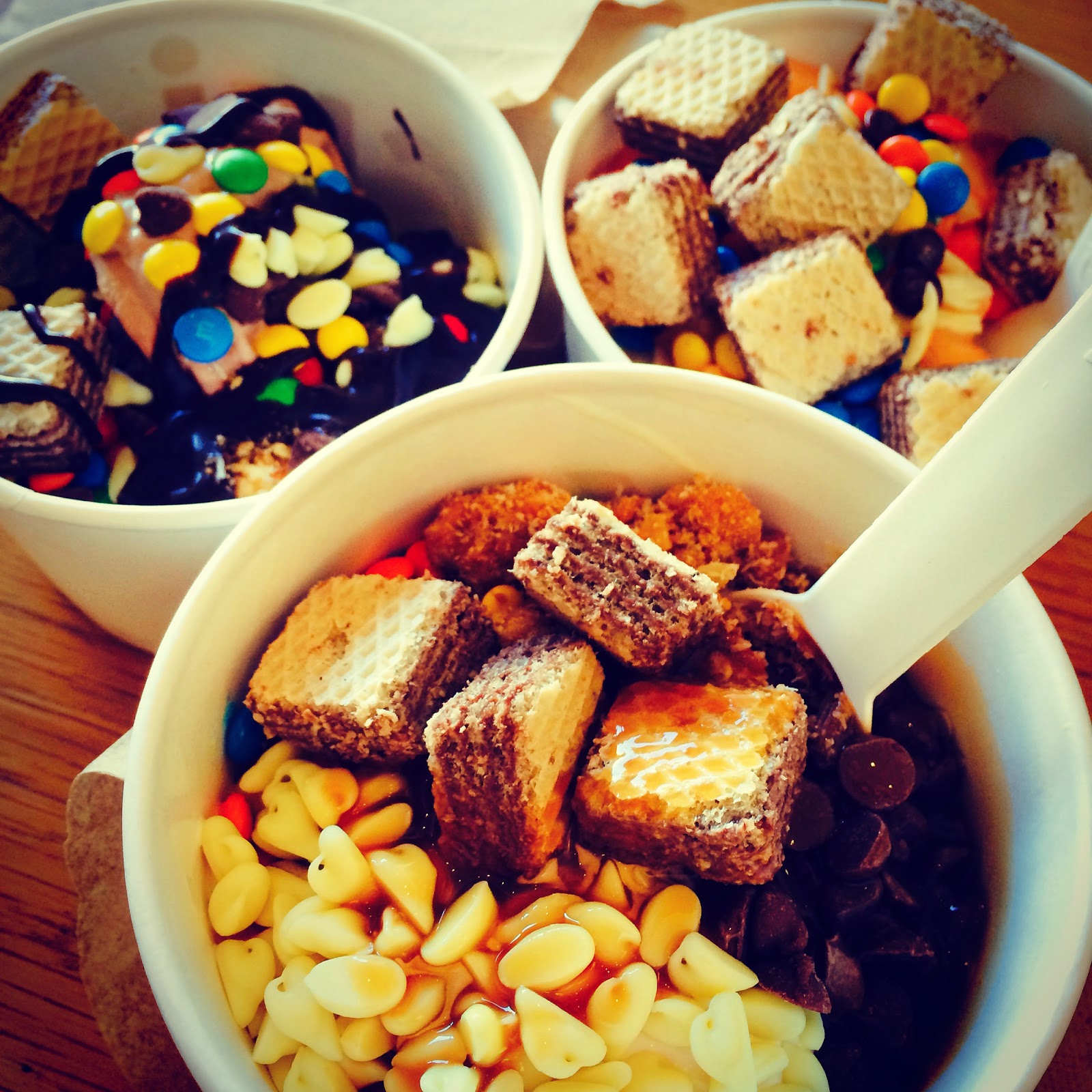 FroYo was (obviously) had on Saturday after I cleaned the apartment with Maire and Tilly in YoChi on Carlisle St - the 4km walk back home was needed to work off the MILLION calories I consumed! It was then I discovered it was National Donut Day, so I had to have a pink donut in honour of it. Considering I never even eat donuts I have no idea why I did this - probably cos it was "my birthday week"... 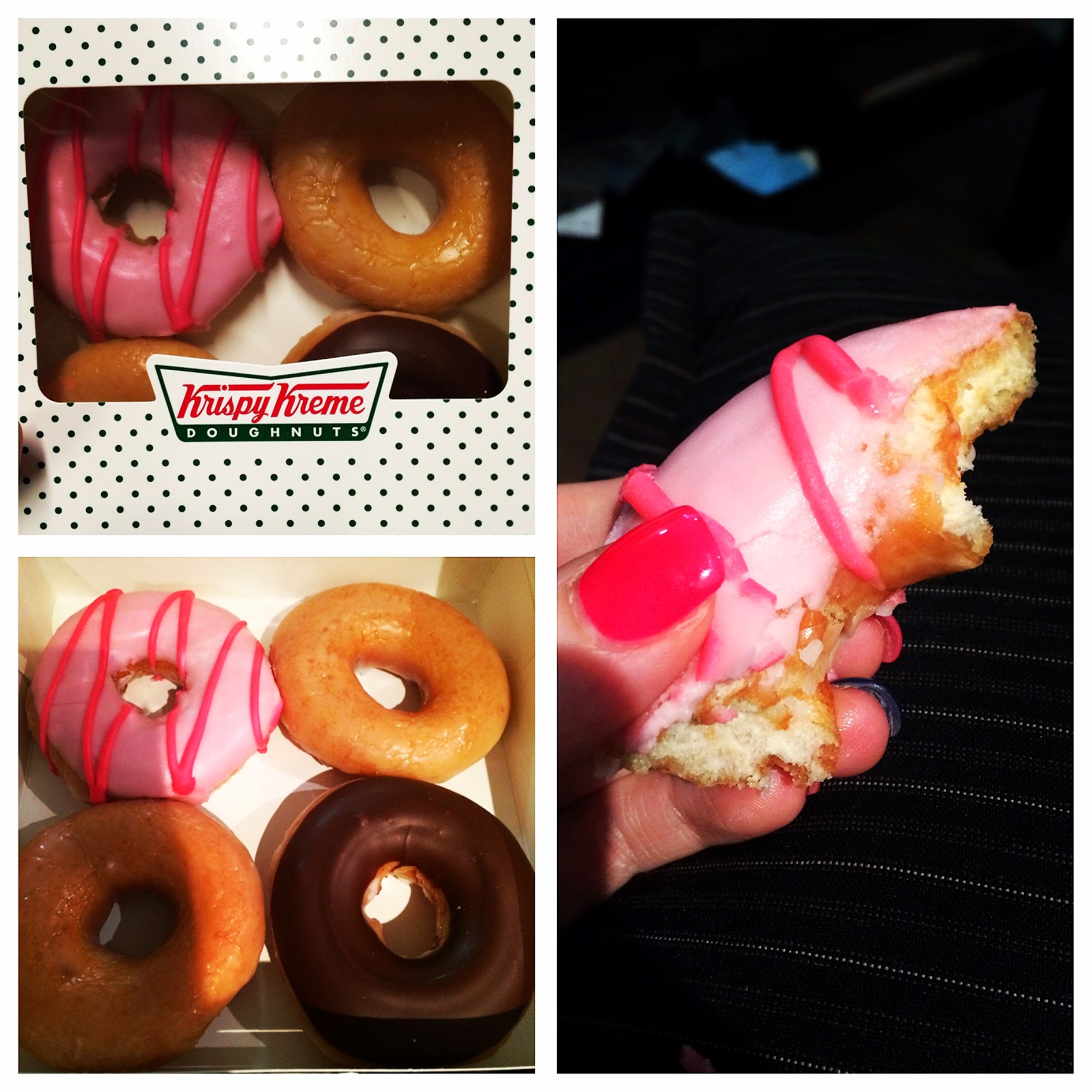 Friday work lunchtime I ask Matty if he wants to come to lunch and he says yea. I mention that we should ask Daniel and Adam and he quickly sends them an Instant Message and returns to me saying "they're a no". I tell him that he's clearly a rookie at this and he should have left me to do the asking. He's laughing at me, thinking I'm clearly full of it and so I send Adam a few messages saying that I can't believe he's choosing to spend his lunchtime with a bunch of sweaty men (gym) instead of with me and a couple of sentences more he's on board. I get back to Matty informing him that Adam is in, and the look on his face is priceless!! He messages Adam something who feels as though he has to come over to explain himself and then we head off to Temperance for some Lunch Special, which was delish.

On the way back to work we walk past a bad-assed looking individual; sitting on his own outside of the bar. Matty informs us that it's Mel Chancey - an ex-boss from Hell's Angels. I wanted to go back and ask to take a selfie with him, but funnily enough the guys weren't so keen on the idea. Matty was laughing nervously saying that he didn't imagine that our mate Mel would be too keen of us all hanging off him; one with his arm around his neck pretending to strangle him, me doing a duck-face selfie pose in front and another one of them pretending to punch him in the face. Imagine how great the photo would have looked though - I feel like my blog really suffered from their cowardliness... ;) 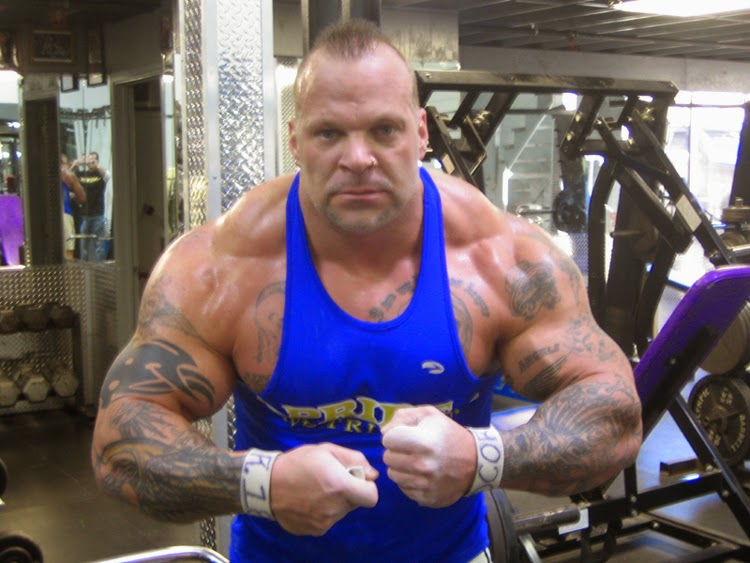 The "Queen's Birthday" long weekend came and I didn't do much Sat or Monday, but Sunday I went out on a day-long bike ride with Kiwi on his BMW GSA R1200 (which has loads of "cool" things on it that I was going to blog about - but I erased the message on my phone with the details, so we'll just stick to the name for now and say it's great!) This was the 6th its kind in the country and something which he has months and has never really ridden - despite some people still being on waiting lists for theirs to arrive in the country! We were lucky with the sunny and dry weather, but it was definitely fresh! 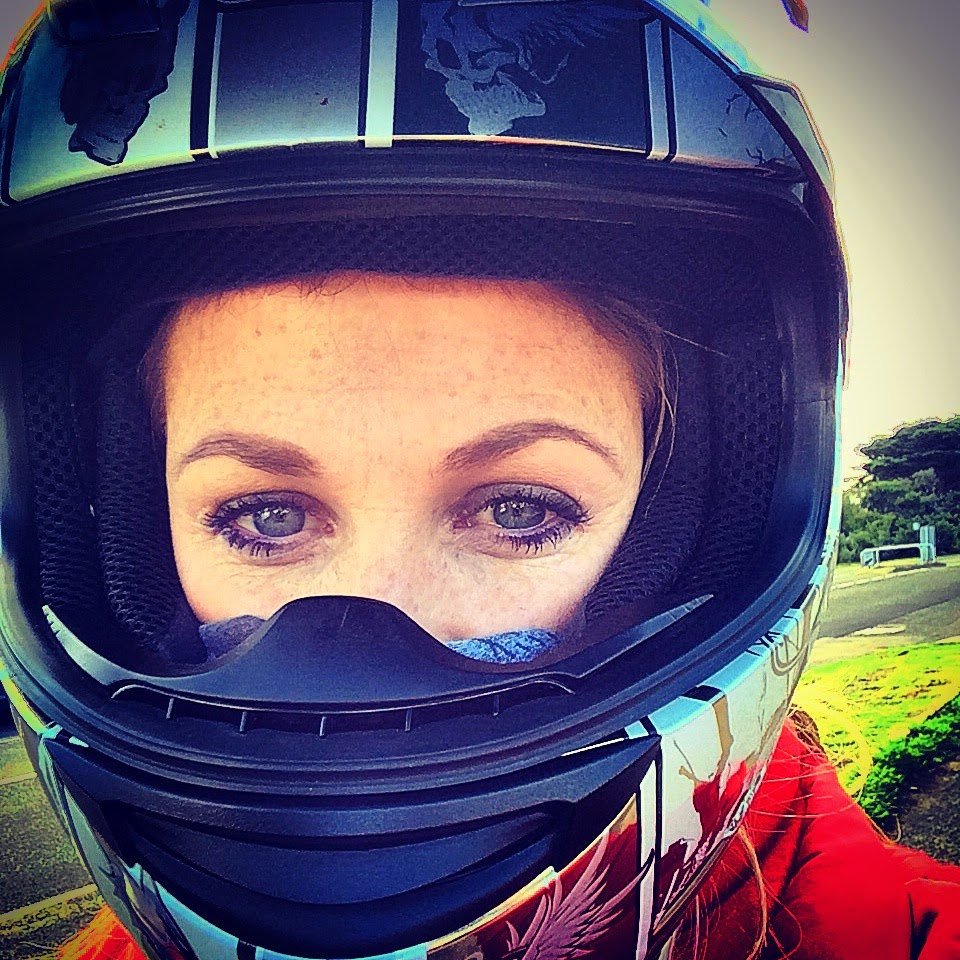 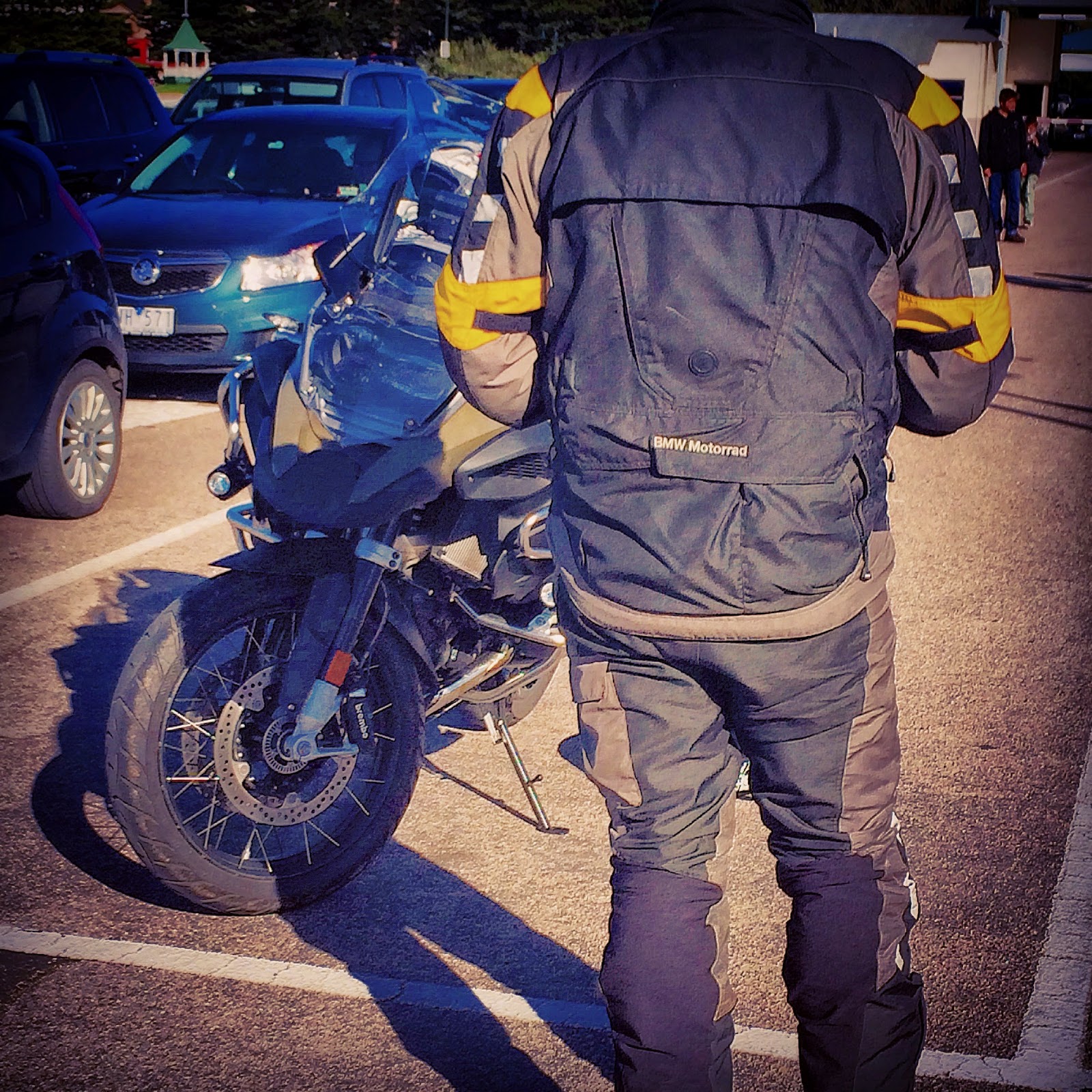 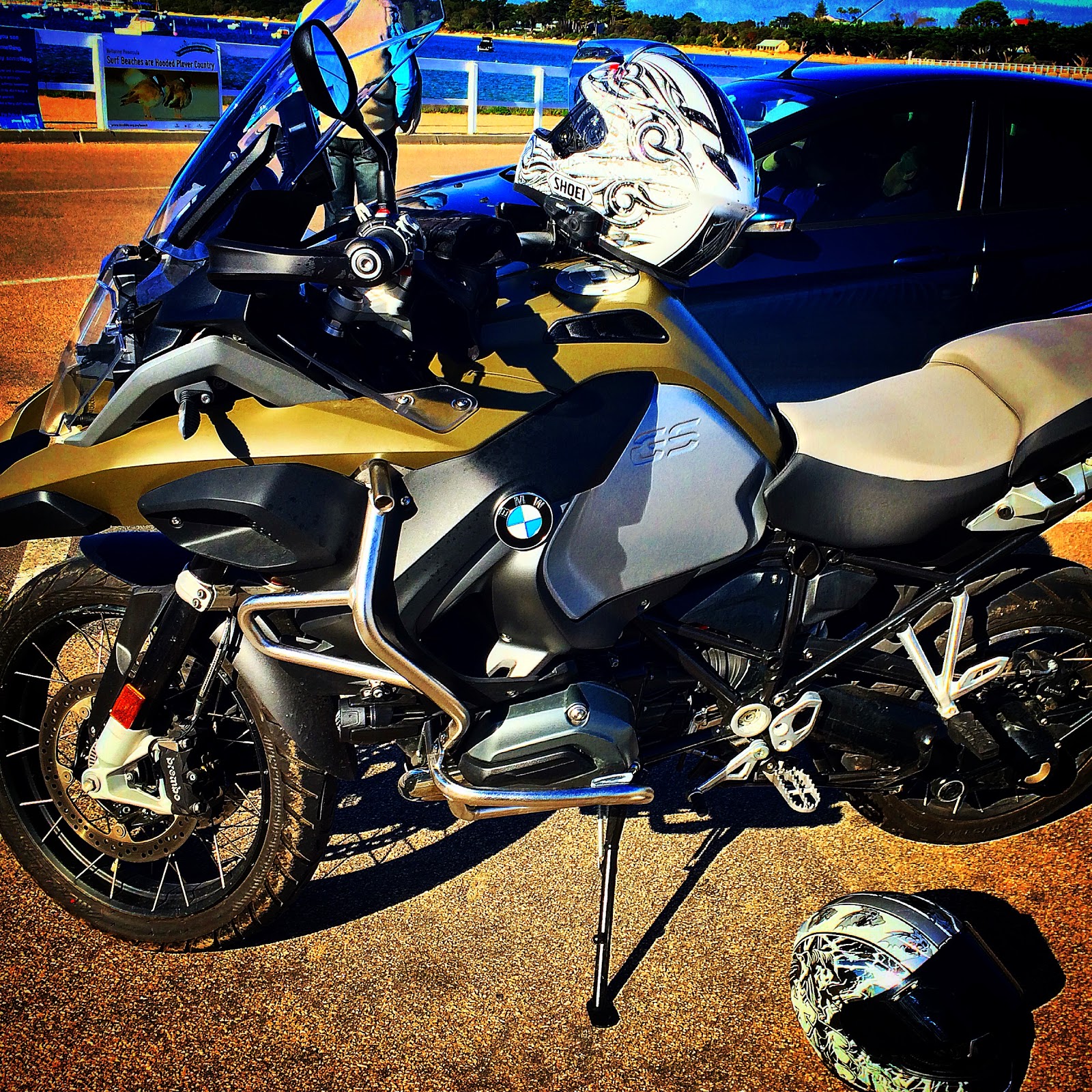 We went around the entire Melbourne Bay, heading to Mt. Eliza, Mornington and Sorrento. We had an old man nearly run us off the road on the highway and a kid kick his football out in front of us in Rye, but all good. We then took the ferry to Queenscliff and from there to Torquay where we stopped for food. Fish and chips and a glass of red wine later to warm up a bit we headed off and visited Bell's Beach and then took the motorway home. 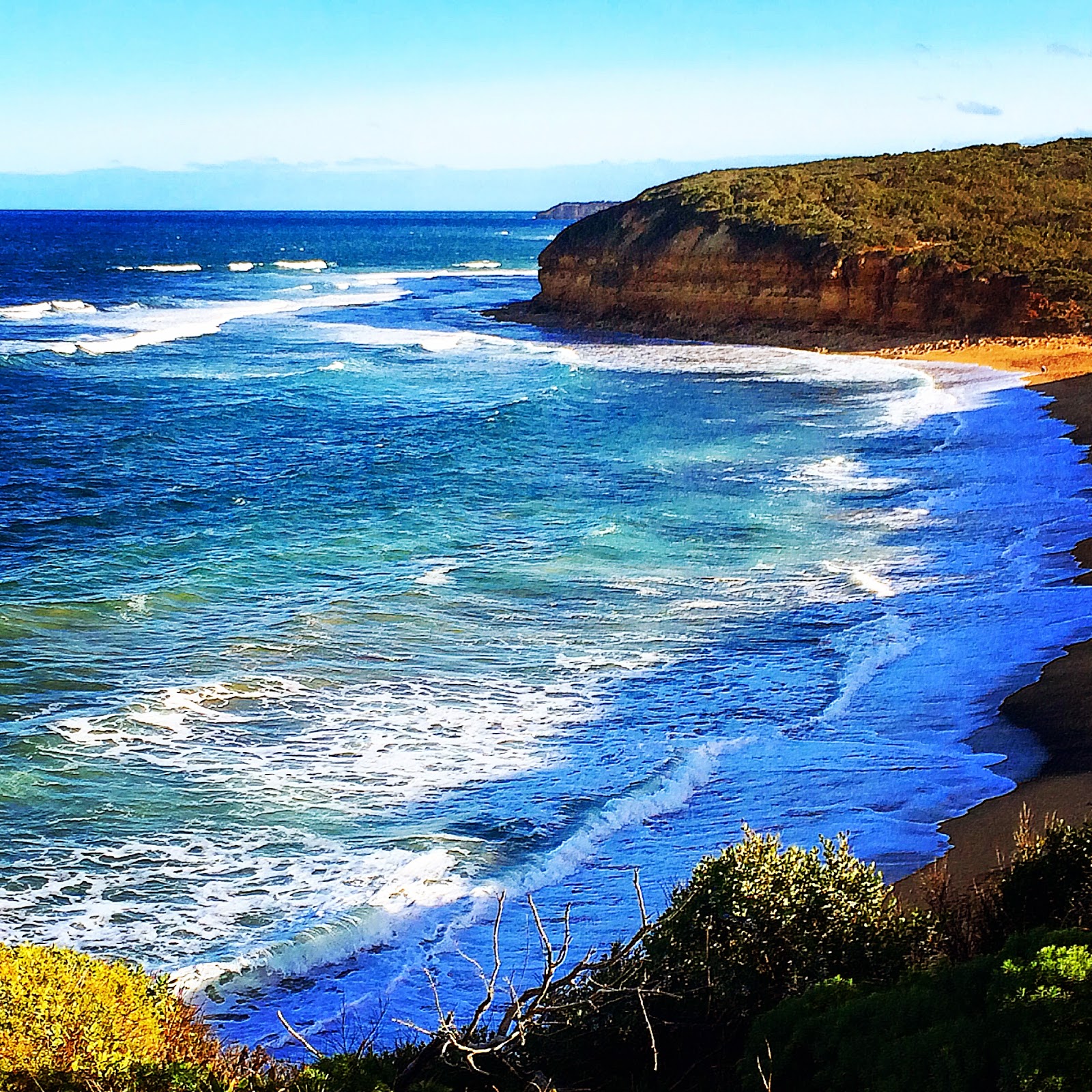 A long day, and no sleep from my flatmate having a house party the night before, left me exhausted and I was actually falling asleep on the back of the bike on the way home! Great day though and I had to go to bed for a bit to warm up when I got home! Let me know when the next ride is Kiwi :) 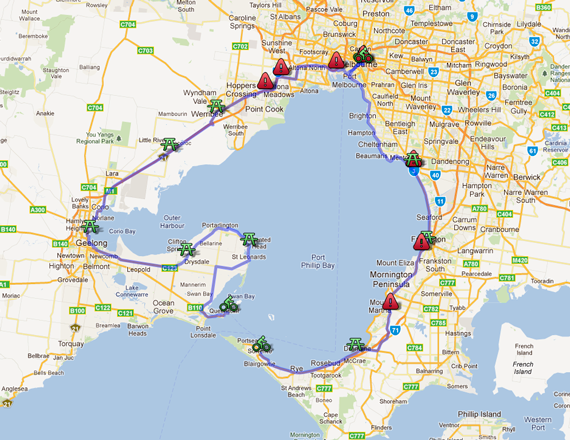 Well, another year old and supposedly wiser; although I know for a fact that's not true. Wise would be to save your money and not blow it on your birthday, wise would be to stick with the hair colour you have, it would be wise to pick an outfit and stick with it, instead of panicking and buying another two and then going with the original anyway. Wise would be to bring a change of clothes to your friend's house for the next day, instead of being stuck with a tiny pair of shorts and a jumper and having to walk Chapel St in the pouring rain, with your streaky tan and fake eyelashes still on from the night before. I'm sure there's a photo of me in the dictionary beside the definition of "Walk of Shame" right now. And, looking for some comfort from my beautiful friend, who shall remain nameless due to the language, was futile; "You look like a complete whore". Well that's twice in one week so. Not even a pair of sunnies to darken the reality of day.

It was worth it though. The streaky spray tan that's still patchy 10 days later, the MAC makeup done by the Nordie who shared mutual friends with me, the dress panic-purchasing, the neon shoes bought impulsively when looking for a black handbag (as you do), the cuts on my feet from wearing them that night and the workout they got, the Balayage hair change that scared the bejaysus out of me, the helplessness at the side of the pitch that I felt having told the team I couldn't play due to being beautified and then watching them lose the first game this season, the spending of way too much money for the past 3 weeks, cos it was "my birthday week" and the awful realisation that I'm now 32-years-old. This is living I wouldn't change it or the people I share it with for anything. 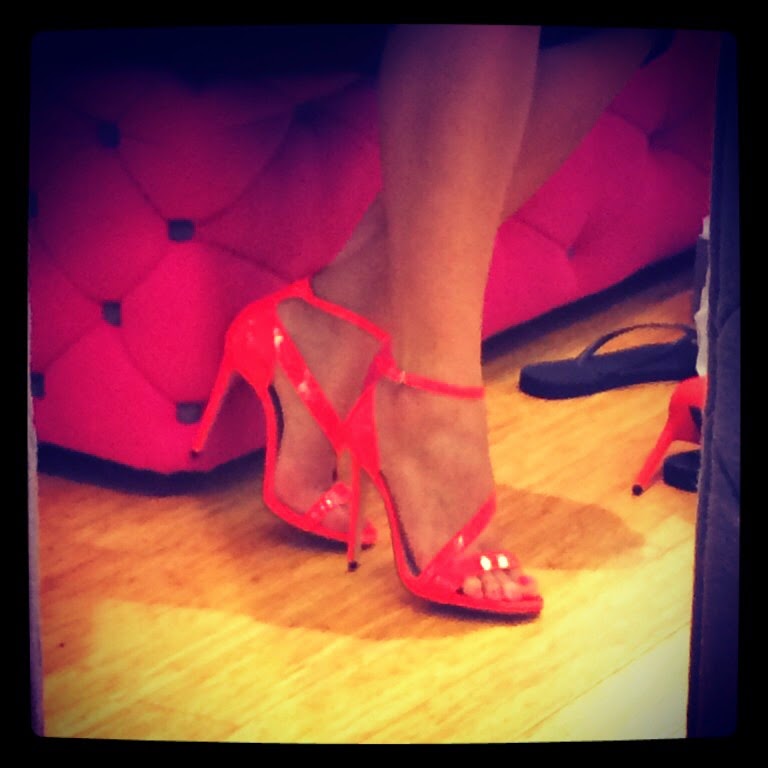