Well what a random week that was!

Super busy in work as usual, back to hockey training and just recovered from the flu before I got sick again; left sniffing, coughing and sounding like a man (or a seal according to Anneke!). Was asked to double-up to Pennant A (3rds), so changed my plans and turned up; despite the fact that I felt like I was dying. Spent the entire 70 mins on the bench. I wasn't impressed.

After the game we head back to the pitch to watch the Premier League Reserves girls play their match. A friend of a friend is sitting at the sideline and is watching the team play for the first time. We're all screaming "Go HOUSE!" and "Come on HOUSE" at the team and at half-time she enquires as to which girl is called "House" as she seems to be very popular! It was probably rude to laugh as much as everyone did, as the poor girl thought the team was "St. Kilda" and not "Powerhouse St. Kilda" and so of course there was much confusion :)

Later, as I stood with Tilly's new dog "Alba" on the sidelines with Anne and Maire, a man appeared with his plastic bags. True to form and supporting the fact that all weirdos are attracted to me, he stops to chat. He proceeds to tell me about his ex-wife and her great-grandfather twice removed, about Members of Parliament that were Irish and asked if I knew Ned Kelly. It was on the tip of my tongue to tell him we were best mates.
Maire and Anne stifle the laughter as I'm left dealing with the weirdo and secretly hoping that Alba, the American Bulldog, would show some stereotypical traits and scare him off. Instead she laps up the attention and eats his crisps. Nice one Alba.
He persists in talking to me, rambling on about Tipperary (and yes, "It's a long way to Tipperary" was mentioned) and Tyrone, telling me who his relatives are and I curse our nation for being one that travels so much. Eventually I manage to steal myself away and stay round the side of the pitch, where he randomly shouts questions about the game at me: "How many players on a team?", "She's a big girl, isn't she?!" or "Do they play here every week?" to which I quickly reply "No...just the odd time" in the hope that he's not going to become our biggest PHSK fan.

We go to "Pint on Punt" (http://pintonpunt.com.au/) who are our new sponsors for hockey and have some dinner and drinks there on Saturday night. Twenty of us turn up and get our membership cards and Maire makes use of hers straight away - her "I'm not drinking tonight" was quickly brushed aside when she went to the bar and came back with two double-vodkas! Not a late night for the rest of us though and by 11pm we were all done. 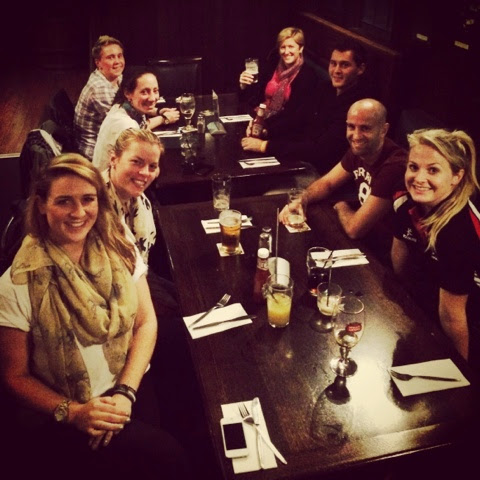 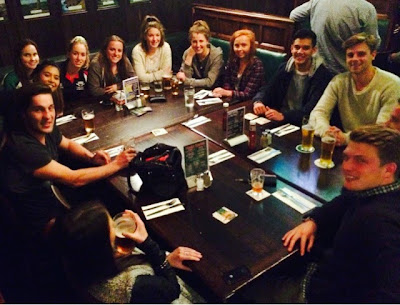 Went to see "X-Men: Days of Future Past" in the cinema at the weekend. I LOVE SCIFI!! I sometimes think I should have been a boy. Until my mouth starts watering at the sight of Wolverine with his top off and then I realise that I'm ok being Ciara again :) Great film and can't wait to see the next one! 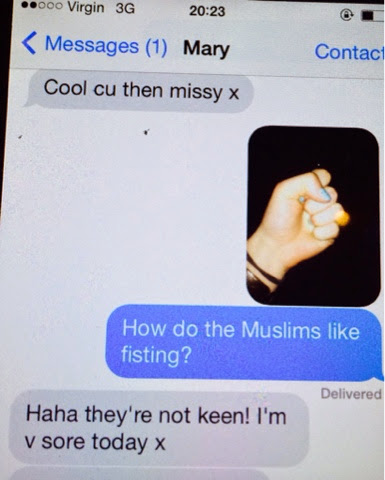 Leaving the hotel to walk me to the cinema, JD is in fine-form and is rambling on in her Nordie accent about the names that she and her brother call each other. Not to be repeated on this forum anyway! She realises that she's left Tilly's beanie in the pub and Tilly sets off sprinting to the pub, after telling us to stay put as we'd only slow her down! She comes back empty-handed and so JD tries to tell her that it wasn't her fault and says that she's giving her "Doggy Breath Eyes" in an attempt to get out of being in trouble. She then pauses, clearly thinking that "Doggy Breath Eyes" doesn't sound right and there's something wrong with the phrase. Tilly and I start laughing our heads off at her and eventually she grasps the "Puppy Dog Eyes" from in amongst the foggy alcohol-blurred thoughts in her mind!

Round 5 of hockey ends with another win by my beautiful team of friends. 5-0 vs Hawthorn this time, and thanks to MCC beating Altona we're now top of the ladder by 2 points. We need to finish first this year to get promoted (we won the league last year but finished 2nd on the ladder, so couldn't get promoted), so that's the aim of the game. Pressure's on girls!! 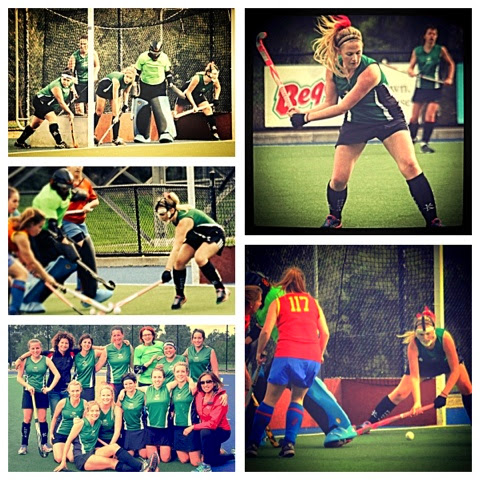 I met Maire to support her in a social committee meeting and bunked the tram down Chapel to get there. I was sitting on one of the "priority seats" (to be offered up to people with disabilities, old people, pregnant women etc) with a guy beside me and there was a girl sitting on one of the four "priority seats" across from me. A young Jewish lady and her two kids got on the tram about half-way down Chapel, and she immediately went over to the girl sitting on her own, stood over her and said "Move!". I sat with my mouth open in shock at how rude this lady was being. There were 3 seats together for her and her children to sit on, and so there was no need for the other girl to move anywhere! The poor girl, who had her headphones in, got up and moved down the tram; while I sat there glaring at the woman, trying to burn my "you're lucky you said that to her and not me" look into her eyes after her recent display. What a disgusting attitude! Who did she think she was?! Next thing, I spot the ticket inspectors about to board at the next stop, so I promptly get up and exit; just in time to see them ask her for her ticket - which she didn't have. I smiled to myself thinking that there is a God, and he's not Jewish.
At least not today.