So my Dad was due to arrive at 5:30pm on Monday. Sunday I get a barrage of texts saying there is some sort of chaos at the airport in Dublin and he has had to switch airlines and won't be arriving til 1am Tuesday morning. My plan of getting plenty of sleep didn't work out and so I was awake til 3am when I got home from the airport. Work the next day wasn't exactly amazingly productive due to the 2-hours sleep I managed to squeeze in.
Returning home from work at 12pm, we head to Telstra to get Dad a SIM card for Australia. Now, this is after texting my mate at stupid o'clock the night before asking him to drop my spare phone that he was fixing back to me, as it was the only unlocked phone myself, my Dad and my sister had between us. The phone was there waiting for me in the morning, but the only issue now was my passcode wasn't working in it.
So, at 12:40pm we head off to Chadstone shopping centre in an effort to speak to someone in Apple who can help us unlock the phone. I was immediately looked at like I had stolen the phone. Admittedly my "I need you to wipe the phone as my passcode isn't working and I don't care what's on it, I don't need it, but can you do it quickly" story was probably backing up their theory. Either way they still did it. An hour later we leave Chadstone with an unblocked (not stolen) phone and a new SIM.
My friend Anna, who is staying with me til she goes home to the UK on Saturday, calls me to say she's near my apartment and so we tear home to give her the key and head off to the airport to drop Dad again so he can go to Townsville to see my sister, her fiancé and the new granddaughter. 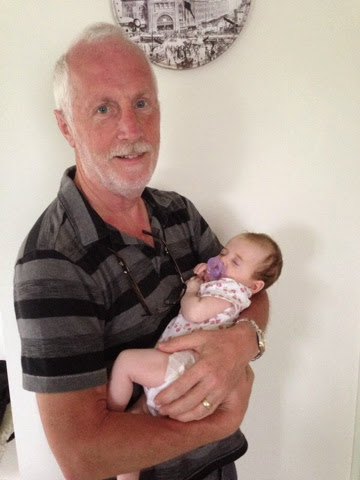 Now; rain has amazing powers here in Melbourne. Aussie's are not exactly good drivers at the best of times, but when it rains; everyone seems to lose the ability to drive a vehicle and utter chaos ensues. Screaming inside my head, I calmly tell Dad we have loads of time and continue to crawl in traffic to the airport.
We eventually make it to the airport JUST in time for Dad to check in and be ready for his flight. Deep breaths and I head back to drop back the car to my mate and walk home to Anna to get dinner.

A couple of nights later Anna and I go to "Sister of Soul" on Acland St (https://www.facebook.com/sisterofsoulstkilda)  for a friend's birthday; where Anna gets food envy at my veggie burger and chips over her Rawsagna (which was, of course, much healthier!). 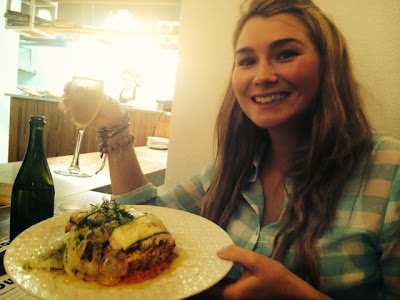 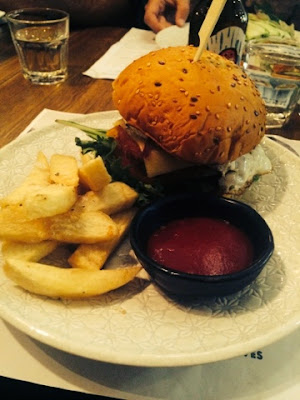 We then head to "Crave" (http://crave.com.au/) for a FroYo before getting the tram home. Then we meet today's Tram Freak.
Now, normally on the number 78/79 or 16 there's a daily Tram Freak. Previous encounters consisted of men in women's clothing, old men rapping, women getting naked due to too much drugs, dancing Elvis's (or should that be Elvi?!), singing priests and other harmless "creatures" that provide nothing but entertainment. This time, however, was different. Anna and I were sitting on the train when I noticed a tall, thin Aboriginal man standing over us. He eyes were wild and he looked less than happy. We continued to talk amongst ourselves as he stared at us. His attention was then turned to another girl sitting on her own, when a random guy said "oh I didn't see you there - how's it going?", pretending to know her to try and save her from the weird drug-induced crazy man. They continued to talk "as friends", as the druggie shouted and screamed "Rats!!!! Monsters!!!!!" and "That's what you think of the native people?!!" while roaming around the tram.
When it was time for the random girl-saving man to get off the tram, he stood beside the door with his hands in his pockets waiting for the tram to stop. The Aboriginal man tore off his jacket and started squaring up to the bystander, shouting in his face "do you want to start something?!" "come and have a go mate!", pushing him the whole time. The tram went silent. I looked around to see if there were any big guys on the tram that could perhaps help the innocent man, but everyone sat there; waiting for what seemed like the inevitable "King-Hit" to happen. The tram stops and said-bystander is pushed off by the screaming lunatic, who then returns to the tram and shouts "WHAT ARE YOU ALL LOOKING AT?!?!?!". You could hear a pin drop. I actually had the incredible urge to laugh cos the guy was so crazy and everyone else was in such shock, but thankfully resisted the impulse that would have undoubtedly left me in hospital. Turning around in a rage he sees his jacket on the chair next to a man and intimidatingly stands over him before saying "Thank you very much kind sir for looking after my jacket, I very much appreciate it" in the most polite tone I have ever heard, before turning and screaming about rats and monsters again. Thankfully the lunatic leaves the train at the next stop and everyone breathes a sigh of relief. Stay away from drugs kids; or from the number 16 tram.

Immediately following this, Anna and I have to wait on Park St for the number 8 to take us down to the apartment. It is 11pm at night and it's raining. Cue skinny Asian man, who starts telling us he was robbed and has to get to Geelong on the train; so can we pay for his ticket. I would have felt sorry for the guy if he wasn't hiccuping every second slurring word, and holding a brand-new Blackberry in his hand which he could have used to call a friend?! When we said that we were sorry, and could't help him, he puts on the worst impression of someone crying I have ever seen in my life. Slapping his hand against his forehead (who does that?!) and immediately wailing at the top of his voice, he turns and walks away; while intermittently doing an award-winning forlorn look behind him to make sure that we're still watching his performance.

One of the days, at lunchtime, trying to be super efficient, I go home to have lunch and put on a wash. After doing so, I eat my lunch and when I'm walking back into my room I notice that we actually have a swimming pool in our apartment that I didn't know about.
In the hall.
Opening the bathroom door I see the room is completely flooded and it's coming from the washing machine. Then the fun begins.
6 towels, 3 buckets and 2 hours of mopping up with 2 mops and a cup (cos the water was so deep it was quicker to use this than a mop!), the water is gone - apart from the indoor pool.
Cue my having to go to the laundrette to wash and dry said-ten-tonne-towels before going back to work. Carpet takes days to dry and then smells for a bit, bathroom door is warped from the water soakage and won't close properly; but on the plus-side, the tiles have never been cleaner! 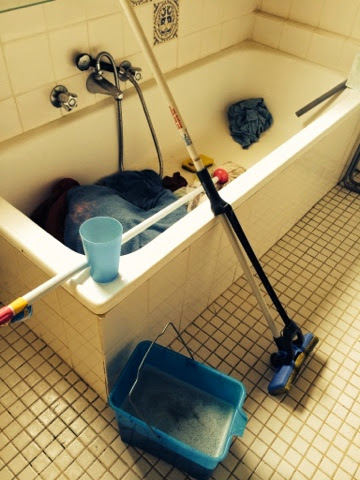 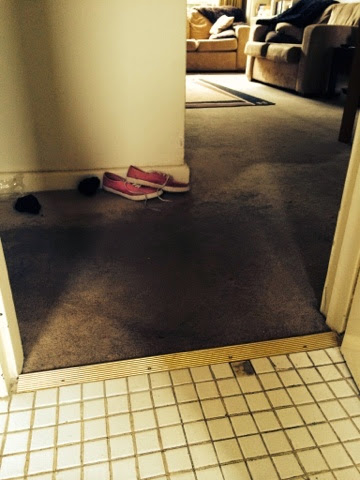