So, it's now mid-March and we're in Autumn here in Melbourne. Weird to think that way, but the cooler weather has started to arrive along with the clocks going back at the end of the month. How the time has flown in since the year began - hard to believe it's almost St. Patrick's Day already!

As I listen to the Formula 1 cars race around the Albert Park track in preparation for competing at the weekend I can't believe it was 2 years ago already since I went to it myself! Weird to think that the sound of these cars screaming around the roads 4km away from my work is "normal" enough for me to think "Oh that's the F1 cars practicing" and bypass the appreciation of the fact of where I am and how much this place has given me.

Some funny moments and highlights from the last couple of moments spring to mind as I try to focus on the laughter.

Tinder (dating app for SmartPhones) has taken Melbourne by storm, with everyone and anyone who is single (or not quite) on it looking for the perfect match. Many a time I have come across the girls sitting in groups of 4 or 5 in the sitting room of someone's house; in complete silence staring at their phones, only to intermittently say "Helllllooooo Mark" or "HA - have you seen Dave?!" or "I DON'T think so Chris!" etc. Girls have also appear to have more of a selection process; as opposed to the guys that I've seen use it - where they just hit "Yes" to every single female on the screen in the hope that one of them will also have hit "Yes" and they'll get a match!! So what if she's 90-years-old, with 3 legs and obsessed with cats...everyone needs loving...


Also, when going to "The Big Day Out" (http://www.bigdayout.com/) I was approached by Kylie the Crack-Whore on the train, who was travelling with her apparent-partner. She asked me "What's your name doll?" and followed this by introducing her name as "Kylie" (she left the "Crack-Whore" bit out) and promptly went on to ask me where I was going, told me that I looked nice and then asked for my number! Her fella then started abusing her for trying to pick me up right in front of him; and I tried to slink away as a scene was created on the platform for all to see. I was just getting over the shock of this as I waited for a friend at the entrance to the station when I was greeted with a quick whistle. I looked up and saw this man staring at me and twitching his head to the side as an invitation to join him. IN THE PUBLIC TOILETS!!!!!
Funnily enough I declined his most generous and tempting offer (vom), and my friend arrived just in time before Kylie and Bog-Boy started fighting over me. I don't even think I can take a silver lining from that situation?! "I still got it" doesn't quite fit when you're talking about a heroine addict and a raving lunatic.

Whilst in Townsville my sister Bhany asked me to take the 6-month-old puppy with me when I was going for a jog. "Take the dog" she said, "It'll be grand" she said.
And it was grand.
That is til 2kms in when Max, the puppy, tripped me up and I landed on him; tearing my shorts, scraping all up my leg and twisting my ankle. What a sight to be seen; an Irish girl in a sweaty heap on top of a yelping dog who promptly acted like his leg was broken to make the scene a little more realistic for those viewing. I'm not sure who got the bigger fright; the dog or the people driving by who had to witness my a*s hanging out of my shorts! I had to scrape myself and my bruised limbs from the ground and attempt to carry said-lame dog some distance before he forgot he was injured and happily ran ahead of my limping remains as I dragged myself home.
Lesson learnt; exercise is bad for you.

And finally; on a recent trip to "Future Music Festival" (http://www.futuremusicfestival.com.au/) I had one of the MANY thousand people who were out of their minds on drugs come up to me to ask me where I got my bag. After replying to her, she noticed I had an accent and asked where I was from. I politely told her I was from Ireland and she appeared shocked for a second before telling me how she had met loads of people from there and they were usually big and angry. She said that she had only met aggressive people from there and she was very pleased to have met me to prove that there were nice and friendly people there too! I had to admit I was confused and was finding it very hard to believe; as we may be seen as drunks or stupid, but I had never heard us as being described as "big" and "angry" people. So she went off happy as Larry and promptly told her friend behind me that she had met a lovely Islander. ISLANDER.
Now; bearing in mind that I'm pasty white, with blonde hair, blue eyes and freckles...and Islanders traditionally look like this: 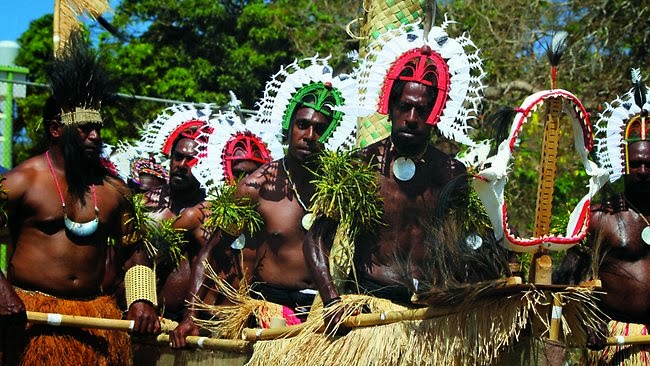 I want some of what she's taken.