Could this be that summer has finally reached Melbourne?!  Not exactly as hot as Perth is at the moment (40 degrees Celcius), but sunny; therefore not raining, which I am happy about! The wind is too cold to allow for lying out and freckle-gathering, but the sun makes everyone happy and makes you want to go outside. I'm even sitting here listening to Pharell Williams "Happy" (http://www.youtube.com/watch?v=y6Sxv-sUYtM) :)

It's the end of the week now and I've been to Pilates three times in the last four days. The classes are tough, but I can see the benefits of them and needed to do the second and third classes to loosen up... I have the exact same Pilates machine at home myself in Ireland; so I've suggested that my brother Kev takes it to do some training on for his Ironman Challenge (psycho). I bought it about 4 years ago - I was clearly ahead of the trend (and disillusioned to think I would ever use it!).

So my little sister Bhany and her fiance Luke headed off on their road-trip to Townsville on Saturday after seeing off the horse Orion and packing up the house. The big move done, they headed to Wagga Wagga on the first day and from there to Bathurst today. They're making their way to Widden where they'll meet up with some friends as they used to live and work there, so it'll break up the trip. 40 degrees and 8 months pregnant...I'm not envying her, but she says thank God for air-con!

I met with a mate for drinks on Friday in The Imperial, where I was served by the crap waitress from last week. She STILL can't get the hang of the order "Vodka, soda water and lime", and each time I went up I was charged a difference price! The "Asahi" she poured looked like an icecream float so one of the other barmen had to come and rescue her! From there we went onto Bridie O'Reilly's (http://chapelst.bridieoreillys.com.au/), which is clearly an "Irish pub". Nice modern place, big and with a huge beer garden out the front looking onto Chapel St. Obviously nothing like a traditional pub from home - which are usually dingy little dark establishments that have a certain smell, with a fire in the corner and full of old men holding up the bar. Still, we got food (obviously, since I'm involved) and left after that. It was a bit of an ordeal my trying to get a taxi, so I jumped on the 78 tram down Chapel and found myself immediately transported back to Ireland and on the Nightlink coming home from Dublin on a night out. The entire tram was jam-packed with Irish who were finished a night's session and were "having the craic" with anyone and everyone. The only thing missing was the Abrakebabra (http://www.abrakebabra.com/) or the Chipper Garlic Chips and Cheese.

Saturday I met with JD (Jenna) and Maire (Mary) after Pilates at La Roche (http://www.laroche.net.au/) on Acland St where we had brunch. Well, JD and I had brunch; Maire had 4 Malibu and Pineapples to cure the banging headache from the night before, and about 4 chips from her portion ordered! Cue 30 mins later and Maire had to make an impromptu exit to get the tram home as she wasn't in a very good way! JD and I do a spot of Christmas shopping; (which actually turns into shopping for ourselves), before I head home to get showered and changed before heading to Albert Park to meet Maire, her boyfriend Colm and their two friends for a BBQ. 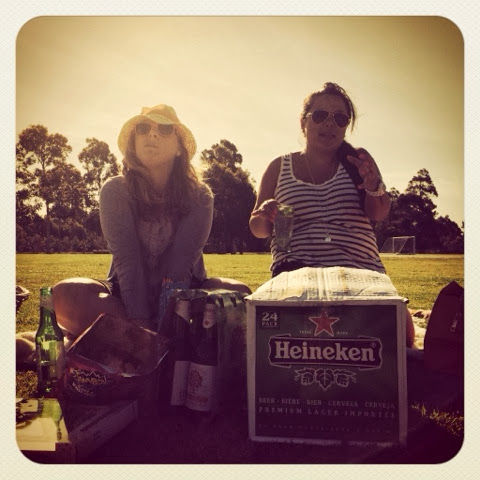 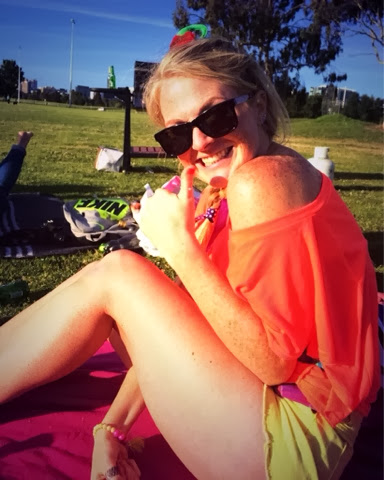 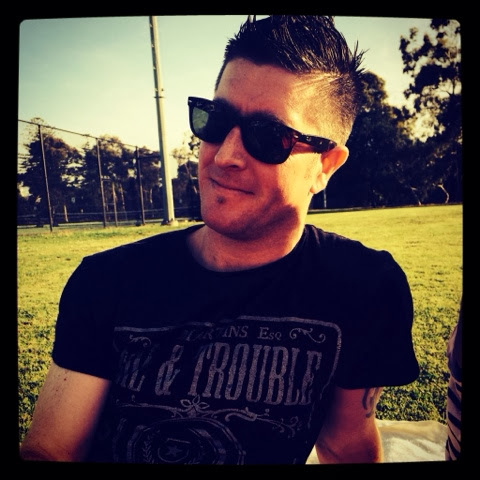 She's in much better form when she arrives and is back on the vodka, soda water and lime. Rainman (Anna) arrives on her bike (with a hat on her head and her bicycle helmet in her basket) and brings some goodies. 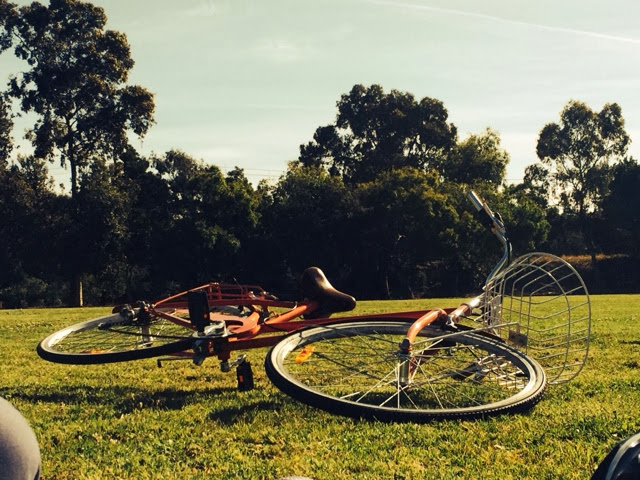 Paul, Toby and Nina (Janine) also arrive and we have a little party on the grass! Much beer and vodka is drank (I stayed sober), plate-frisbee starts between the lads (which doesn't turn out to be very aerodynamic), before the plate is then used to eat of. "It's ok though", Colm says, "no dog has gone to the toilet anywhere in this park". Cue a dog, sprinting towards us with his tongue hanging out - a quick licking of Phil's face to distract us all before he grabs the sausage on the plate and eats it!! We are then joined by dogs of every shape and size, including an Irish WolfHound the size of the BBQ! 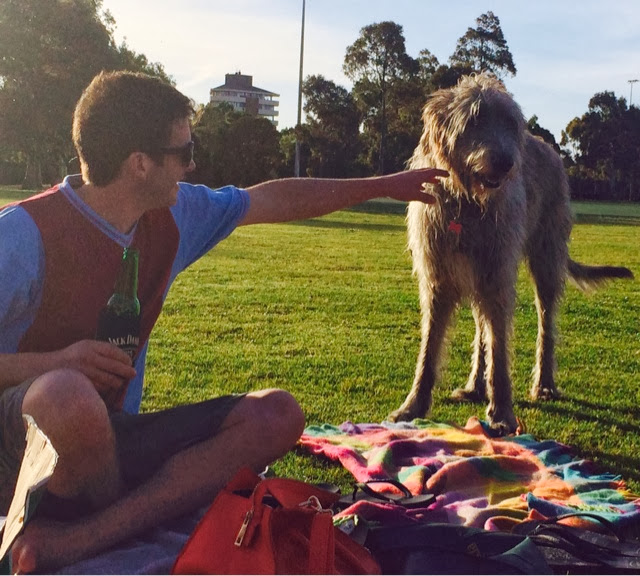 Then, as the sun sets behind the trees and the temperature drops to what felt like -10 degrees, the drunken air-hockey starts. It looked like a mixture of Hurling, Hockey, Baseball, Cricket and Golf. Paul took a swing at the ball so hard, and missed, that he nearly dislocated his elbow! Colm was in flipflops and acting as goalie, taunting the other males to hit the ball at him as hard as they could. Phil has a beer in one hand and the hockey stick in the other; the picture of fitness! I ended the game before any limbs were broken, much to the annoyance of the rest of them!


Back to Maire's house, where she decides she can climb down the tree outside her third floor apartment, but promptly falls off the sofa and decides to leave the tree-scaling to another day. Phil and Colm get into a heated debate about how cricket was or wasn't like "rounders for adults"- I'll let you decide which one of them came up with that idea. :) When Maire was falling asleep and Colm calling me "Ciara-Montana" I took my leave and headed home to my bed. Never a dull moment in the house of fun! Love those guys!! Going to miss them as they head home for 5 weeks for Christmas. VERY jealous! 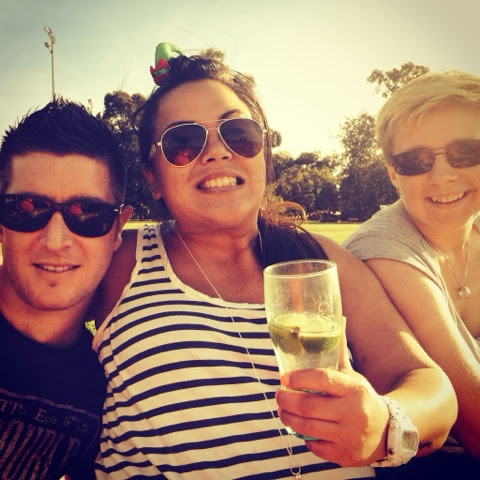 Was meant to meet JD and Tilly Sunday at 11:30am, but they didn't turn up til 1pm, so I headed to St. Kilda Markets to have a look around. The stalls are getting better, with a lot of quirky and creative items in them; from handmade jewellery, box engraving, knitted dolls to paintings and handbags. I ended up buying a bag, bracelet and ring for myself (again, hoping that Paul hasn't decided to start reading my blogs!) and had to walk away to stop myself from spending anything else. 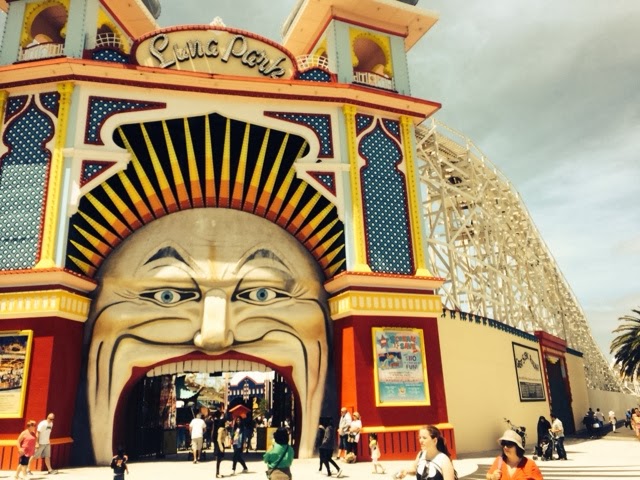 The markets (http://www.stkildaesplanademarket.com.au/index.htm) are on the Esplanade from 10am - 4pm every Sunday and are well worth a browse. My bag was from the Cybertart stall (http://cybertart.com.au/) and of course I went for the pink one...suits me; Meow Meow :) 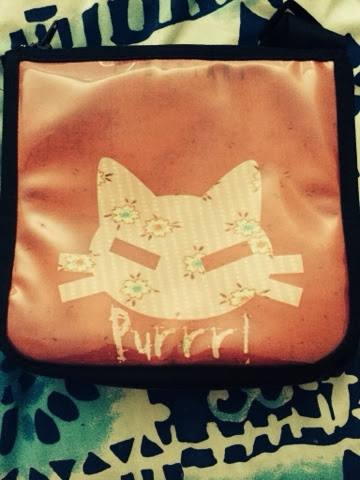 My bracelet was from Marie B Jewellery (http://www.mariebjewellery.com.au/) and I just wanted everything on her stall! Real leaves dipped in silver and lots of cute pieces, I was in Heaven! 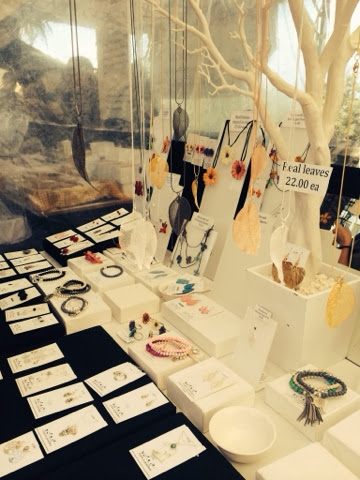 EVENTUALLY JD and Tilly turned up at Rococco (http://www.rococo.net.au/) and I had the smallest portions of lunch in history. Flaked Atlantic Salmon and Beetroot Salad both the size of a 50c coin each, I wasn't going to be getting fat on that! So, I (obviously) got a Froyo afterwards and sat in the sun with the girls. I think I have a problem... 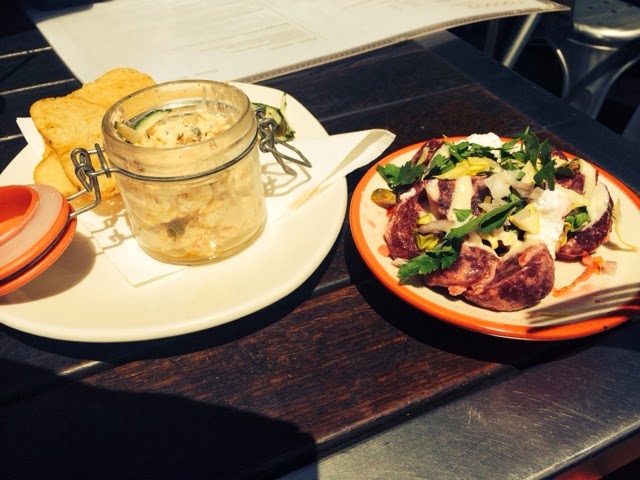 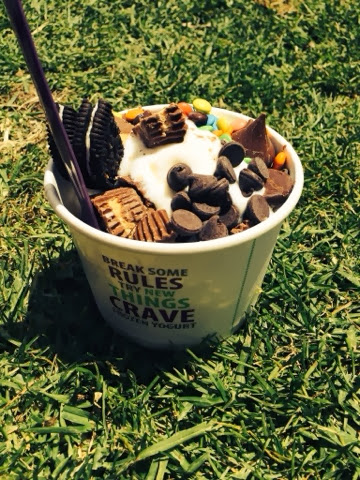 Home to clear out my wardrobe of unworn clothes, and almost 4 black bin-bags later I have them ready for the charity shop! I have WAY too many clothes, but still nothing to wear of course. I seem to have an outfit for every "what if I do this" occasion, but nothing to wear on a daily basis at work or at home. I'm sorted if I ever go to dinner with David Beckham though; that's the main thing. Obvs.

I have seen it all now though. I sit down to see what Paul's watching on TV and my mouth falls open in shock. On the TV screen, running around a pitch are 2 teams of females, with helmets and shoulder pads playing American Football. In bikinis. 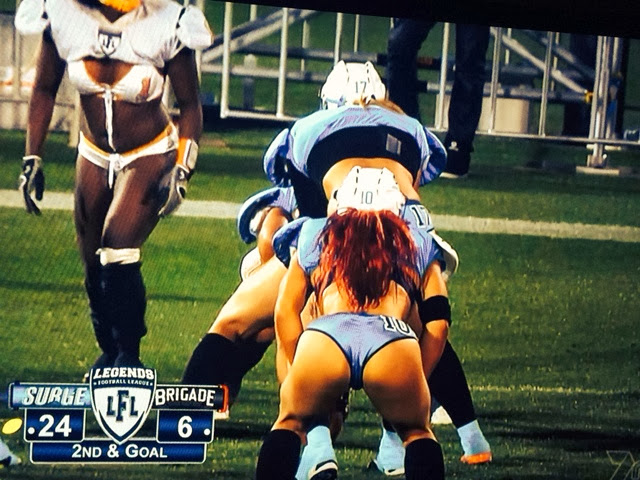 Paul sees the absolute horror on my face, laughs and explains that it's a real sport and to watch it. It's called "Legends Football League" (http://www.lflus.com/). I watch, in awe of these beautifully sculpted females being able to not alone go out in public in a bikini, (never mind on national TV), but to RUN and jump and dive on each other in bikinis and not have a wrinkle out of place. These girls even have full makeup on, long hair and manage to look beautiful with a mouth-guard in let alone somehow being sweat-free. I am obviously also extremely grateful that Powerhouse St. Kilda Hockey Club's uniform isn't anything resembling the attire these females have on - although it could be a good tactic for putting off the other team...?! Blinded by the glare of my pale white skin, not mentioning the wobbling and shaking...good God I get goosebumps thinking about the nightmare of it all! 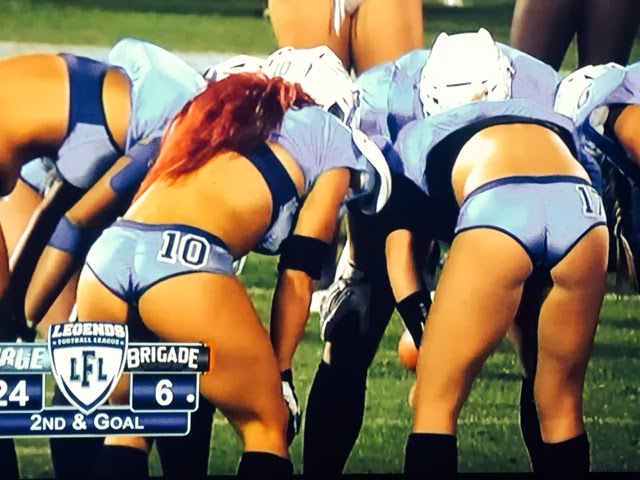 I am, however, disgusted that the only reason the sport is so well supported (the crowd is full of men) is obviously due to the fact that these girls are wearing next-to-nothing, are consistently bending over in a perfectly coordinated method of keeping the attention of the hot-blooded male "fans". The shoulder pads are fitted in a way that they don't cover any cleavage, the bikini bottoms are slightly too small, thus showing off the perfectly formed athletic asses of the players. Even the helmets have a see-through visor so you can see the girls' faces. Why don't the male NFL wear no tops and short shorts? Why don't they wear the same helmets? I am amazed at how fit and hard-core these women are, but know that if they were wearing a tracksuit they would have about 2% of the attendance of the crowds in the stands and most likely no TV air-time. Would you be happy as one of the players, knowing that the crowd are there to ogle at your body rather than appreciate your talent or athletic ability? Are you the one laughing in the end because you're getting the publicity or the pay regardless? Or is the joke on the men at the end of the day? Even my watching them is for their looks and my envy at their aesthetics rather than the game they are playing!

As the saying goes "Sex Sells"; and in this case it comes in the form of female GridIrons in bikins.