A busy weekend gone by!

Friday night Paul and I went to Epping to meet my sister Bhany and Luke for dinner in Hogs Breath (http://www.hogsbreath.com.au/ - @hogsbreath one of Clint Eastwood's chain of restaurants). It was packed as it's only open fairly recently, but we got a table within 10 mins. And within another 5 minutes we figured out that the teenage Aussie waitress couldn't understand Paul. Anyone reading this who doesn't know Paul might take from this that he has a very strong accent or perhaps has some sort of speech impediment; but no...he's simply Irish. Kristen took our drink orders; Bhany and I got a Diet Coke, Luke a beer and Paul asked for a "Rekorderlig, Strawberry and Lime"...four times. On the fifth time of saying "sorry?" she wrote something down on the notepad she was holding and then left. Cue 2 minutes later another waitress asking to confirm the drinks order and then going over to tell the lovely Kristen what Paul had said.
Next it came to the food. I ordered a rack of ribs, Bhany a burger, Luke a Regular steak and Paul a "Mega Garlic and Mushroom Steak" (http://www.hogsbreath.com.au/main-menu/our-menu/prime-rib-steak). After another blank look from Kristen, she wrote something on the page and left. Cue same second waitress as before asking what sort of steak it was that Paul wanted. Paul repeated that he wanted a Mega Garlic and Mushroom Steak, cooked Medium. She appeared to understand the apparent alien language being spoken by Paul.
The food was brought out by a male waiter, who automatically went to give the ribs to Paul, and then said "they're for YOU?!" when I said that was my order. Clearly he doesn't know how much I love food. 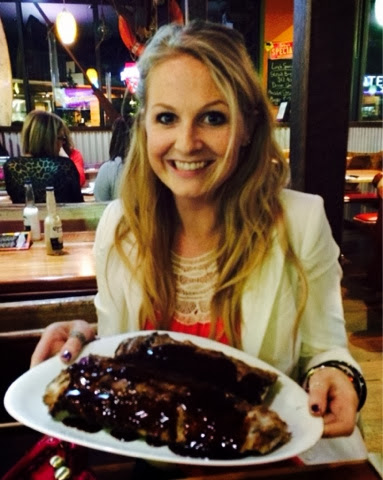 Bhany's burger was brought out, followed by Luke's steak, and then a "Regular Surf-n-Turf Steak" for Paul. Classic! The look on Paul's face told the waiter immediately that he didn't order it; and the order was quickly repeated to the waiter, who, gratefully, could clearly understand this foreign-tongue speak of the Emerald Isle. At this point Kristen comes over to tell us that she's "finishing her shift" and hands us over to another girl. All lies since we see her hiding over by the cash register til we leave; hopefully vowing to take some English lessons!
Mains and desserts are polished off and our Christmas Dinner is over; and we return home to bed for about midnight. 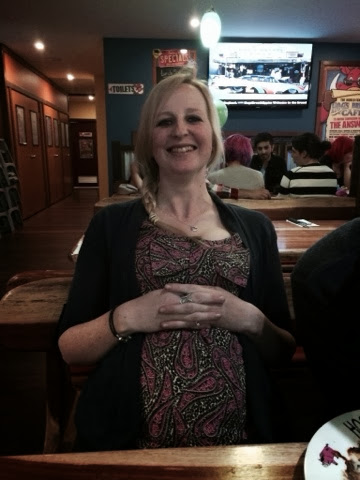 Saturday (or "Sat-day" as Aussies pronounce it for some reason) morning I head to "Specsavers" (http://www.specsavers.com.au/) to buy some new prescription glasses and sunglasses. That was an ordeal in itself! I want to make sure something that I wear every day for most of the day, for the next 3 years, suits me. I found a pair that I wanted, but then noticed that they had the British Flag on the side of them and so couldn't buy them. (http://www.specsavers.com.au/glasses/mens-glasses/red-or-dead-81/#). I tried my hardest to justify how I could wear them, but knew I couldn't. Paul reminded me how Inobody at home would buy Reebok Classics cos they had the British flag on them, or how they'd cut the flag off! I honestly couldn't bring myself to buy these glasses as I knew I wouldn't feel comfortable wearing them due to this tiny emblem on the arms and all it signified. I asked the shop assistant if she had any glasses similar without the flag. Her response was "So, you're clearly from the South of Ireland". Obviously I wasn't the only one who had come across this dilemma!
I don't know if it was my taking a very pathetic stand for my country or whether it was due to my not liking the flag and all that it symbolises in our history; or both. Then again, I wouldn't have bought the glasses if they had the Irish flag on them either! lol!
Anyway, I (FINALLY) managed to choose the 2 pairs of glasses and ordered them for 10 days time.

I headed off to meet Ruthie, Lara and Rainman for brekkie at "La Roche" (http://www.laroche.net.au/) where we all learnt a little bit about each other - I'm superstitious and have stupid habits, Lara has very soft knees, Rainman gets annoyed at not knowing why some people are in wheelchairs and Ruthie is racist and had an interesting tale about a patient of hers. Obviously I'm exaggerating here and won't divulge the conversations, but this should make them smile anyway. What a great laugh we had sitting out on Acland St. and we headed off to do a bit of shopping for Ruthie's friend who was turning 30. Somehow I come out of the shop with a keyring, bracelet, handbag and earrings; and a lot poorer! Lara tries on a skirt that makes her "look like a sausage roll" and Ruthie a top that makes her "look like a pirate". Fun times!

I meet up with JD for coffee (I have a Diet Coke since I don't drink coffee), straight afterwards, in "95" on Acland (http://www.urbanspoon.com/r/71/1566075/restaurant/Melbourne/95-Espresso-Bar-St-Kilda) and from there we head to "Coco Cubano" on Greville St (http://www.cococubano.com/pages/cafes_bars) to meet Una for lunch, who has herself been shopping. Una is starving as she has been to fitness and running that morning, so we quickly order. Una wants the Club Sandwich, I have the Garlic Prawn Salad and JD another salad. This is a really funky bar/cafe and the music is cool. We wait a good bit for the food, but eventually it comes. Well, JD and my orders do. We explain to the waitress who took the order that we're waiting on the Club Sandwich and presume it's on its way. 20 mins later we're still waiting and I have now finished mine. Una, who is famished at this stage, looks like she's going to knife the waiter in the head when he comes to clear my plate! He goes to find out what happened and somehow her order was missed. Either that or we have another Kristen on our hands...! Another 15 mins later Una FINALLY gets her food, and the nice waiter halves our bill to keep her from stabbing him :) It was a pity they messed up, cos the place is cool and the location perfect. Still - they did deal with the situation when it was finally noticed, and the waiter escaped with his life, so it was happy endings all round! ;)

We head home and get changed to head out again to Kathy's Leaving Party and onto a night out with the hockey lads. Unfortunately, when we arrived at St. Kilda Bowls Club (http://stkildasportsclub.com.au/) Kathy was nowhere to be seen, and instead we had to deal with the stares and comments of about 100 men who had clearly never seen a female in their lives. I had my first night out drinking in 11 weeks and was enjoying it! The lads from hockey came to meet us in the Club and we stayed there til about midnight. Highlights were Tom pouring his own drink all down his top for some reason, Mary almost killing everyone with the darts that were being used for a drinking game and Rainman having to use a "safeword"!!

Sunday, today, is December 1st and the official beginning of Summer! Melbourne pulled out the stops by getting to 30 degrees and everyone hit the beach as a consequence! 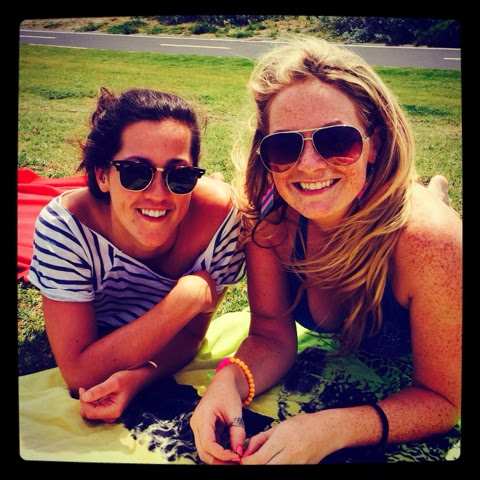 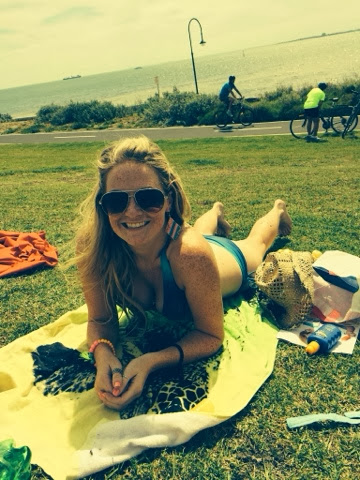 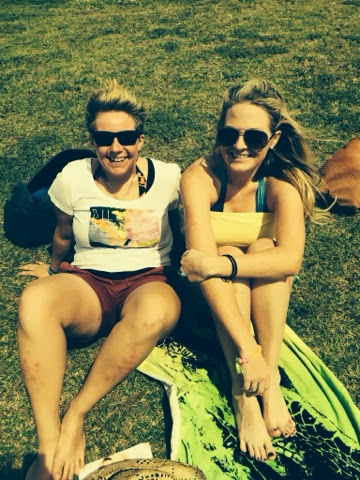 JD, Nina, Paul and I chilled out on the grass near to Elwood beach for a few hours and then headed about 4pm as JD was burnt and was drooling thinking of getting a frozen yoghurt. We headed off to Acland St putting the North and South of Ireland to rights between the Catholic Fenian Ciara and the Protestant Hun JD! :)

We got to "Crave" (http://www.cravefroyo.com.au/) and filled up our cups with Frozen Yoghurt and toppings. While waiting in the queue, there were 2 French girls in front of me who had chosen the smallest cup and had it overflowing with Fro-Yo and toppings. They were commenting on my big cup (despite mine not being full or overflowing like theirs was) and sniggering and making fun of me and asking "how the hell is she going to eat all that" etc. So, I turned around in their faces and said "Fais attention, il y a des gens ici qui parlent francais aussi" ("Be careful, there are people here who speak French too"). One of the girls ran out of the shop, leaving the other (who was now puce) saying "OH! Excuse me!" in English, followed by "Nous nous demandions seulement comment tu peux manger tout ca" (We were only wondering how you were going to eat all of that"). I smiled (with daggers coming out of my eyes and spearing her repeatedly in the head) and simply said "J'ai faim" ("I'm hungry"). I have never seen anyone go so red, then white, and then make such a quick exit. I think they will have learned a valuable lesson today. 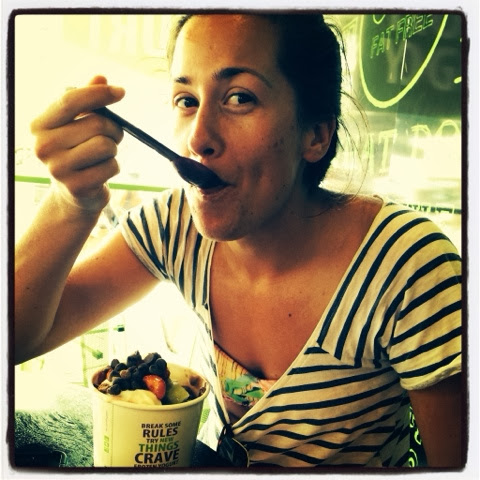 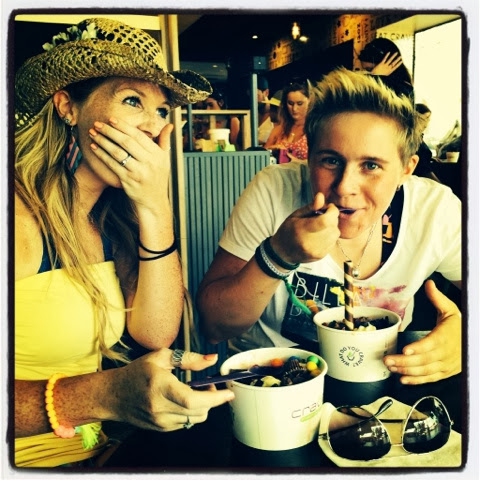