I don't know how many times Paul talked about how he has never been on a snow holiday without doing anything about it, so I decide to organise a group to go to Queenstown in New Zealand in September for a week. 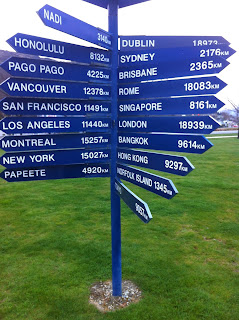 In the end there were 13 of us that decided to go - all arriving at various times and staying for different lengths of time, but overlapping in the middle of the week at some stage :)
And what a great time was had by all! Well...I had a good time, but thought that God had it in for me a couple of times. 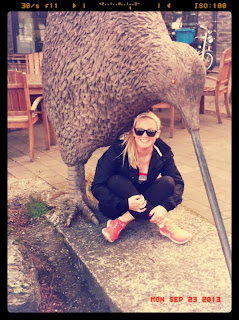 Paul and his best mate Johnny, Nic, Em, Cho and I headed off on the Sunday and Leno picked us up in the car as she was already there. Sunday was spent chilling in the house until the cards came out and the Tequila made an appearance! 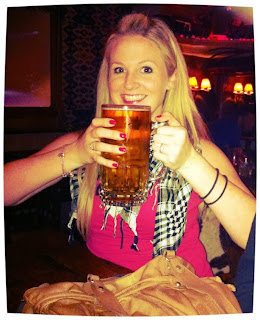 Sore heads all around the next morning; most of all by Leno who decided to vamp up the outside of the car on the way back from a drive! (Sorry Leno - just be grateful I''m not posting any photos of it!) We went down to get out of the house (and climb some trees...as you do!) and had some beautiful carrot cake and ice-cream! I was definitely on my holidays now! 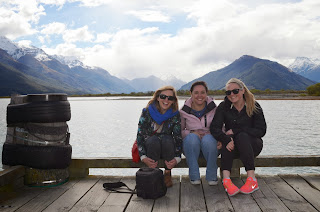 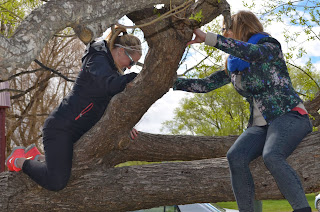 We picked Una up earlier that morning and Kathy's flight was delayed, so we missed out on day one. Everyone else had gone snowboarding and had a ball at The Remarkables (http://www.nzski.com/report.jsp?site=theremarkables). 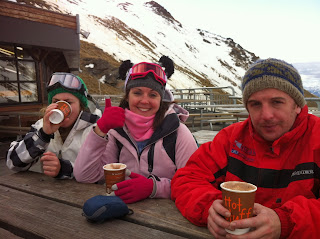 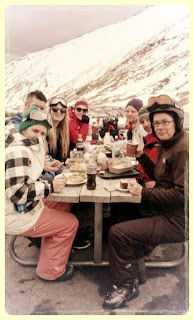 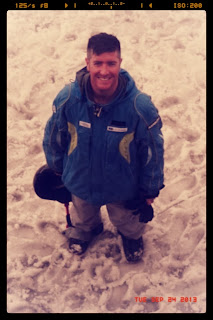 Next day Leno and I decided to postpone our 2 day trip up north to when Kathy arrived and we headed off to attempt snowboarding for the first time. Talk about a scary and frustrating sport! My knees were in bits from falling over so often, I swore that I'd buy knee-pads if I ever did this again! I stayed on the baby-slope for the entire day, with the aim of being able to go down once without falling by the end. Mission accomplished maybe once or twice...at a snail's pace, but accomplished nonetheless! At least we looked the part (obviously the main thing!)! 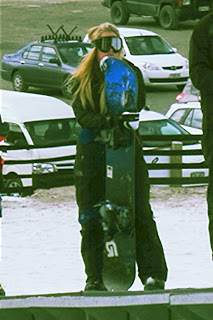 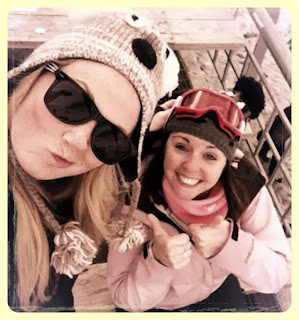 Day 2 I was tired but eager to go and try the snowboarding again. We headed to Coronet Peak this time, which was much more beginner-friendly (http://www.nzski.com/mountain.jsp?site=coronetpeak) with more snow. I FINALLY clicked with the snowboarding when I realised that I was "Goofy" (left-footed) and not "Regular" (hardly surprising; when have I ever been normal?!). I had much more fun this time and ventured up on the higher slopes a number of times, before my legs finally gave out about 3pm and I was done. 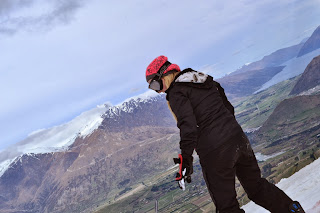 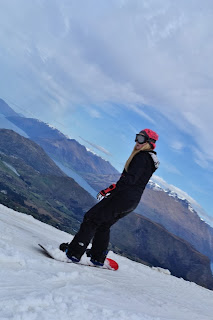 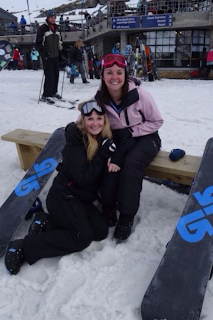 That night Suzie, Lydia, Mary and Colm joined us and Paul and I met up with his cousin and his fiancee for dinner. Our friends were absolutely hammered by 9/10pm when we met up with them and so by midnight I decided to call it a night and head home. They managed to lose Nic along the way earlier in the night and nobody decided to look for her til 3am! The partying in the house continued with people coming into me in bed to chat, with dancing, crying, shouting and screaming. Wild animals wouldn't have been able to keep up with this lot! Nic turned up in Cho's room and all was well with the world again. Apart from when I only got an hour's sleep and was fit to kill them all in the morning!
Kathy, Leno and I headed off in the car to Franz Josef on the 6 hour drive. We stopped at Lake Wanaka and tried out the Puzzle Maze before heading on and straight into a massive rain cloud, which refused to leave. We arrived in the hostel and ate something quickly before hitting the sack at about 9pm. 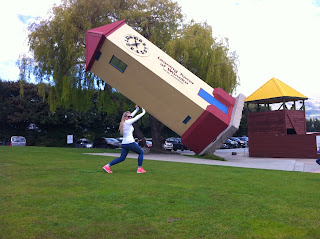 Next morning we headed to Fox Glacier to do a 14,000ft Sky Dive, but it was cancelled after an hour's waiting for the clouds to clear. Things were not looking good... 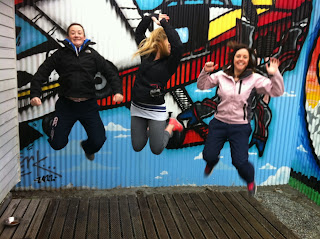 From here we headed back to try and move our Franz Josef Glacier Hike closer, had breakfast and then found out that the Hike had to be cancelled cos of the weather. So we walked up to see it anyway in the rain. 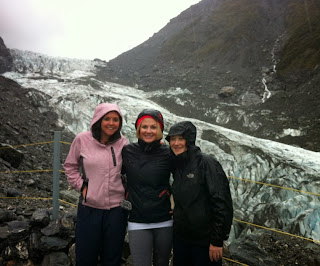 Back into the car for the 6 hour trip back to Queenstown and there was silence in the car. 2 days wasted and a 12 hour trip for nothing. I was not a happy camper when I got back!
Saturday decided to do some White-Water Rafting and a Bungee Jump. The White-Water Rafting was also cancelled and the Bungee Jump was closed when we got there. I was starting to think that I wasn't meant to be having a good time! 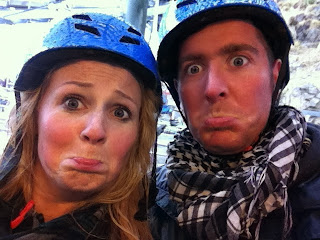 Decided to try out the Powerboat, where we were blinded by the water hitting our faces at 80mph! Sunglasses are a MUST on this adventure as well as a scarf and waterproof clothing (and mascara!). Great fun and would recommend to everyone! The boat comes so close to the rocks it's hard to believe how people aren't killed. I think if I knew how close we would be to death I would have avoided this! 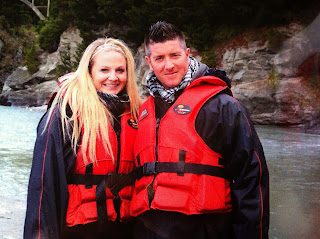 From here we got a helicopter to the top of the mountain and then did some luging. We were to get 5 laps, but at lap 2 the Heavens opened and place was flooded. Consequently, when we were going on lap 3 to the end, we noticed that our brakes wouldn't work in the water; which made things a little more interesting to say the least! Turning corners on 2 wheels screaming my head off; an experience I was surprised to have come out with my life still intact - who says I'm not a good driver?! 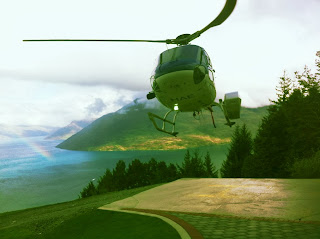 Saturday night we all went out for dinner in Pog Mahone's (http://www.pogmahones.co.nz/) where we had hot stones which cooked our own "Surf n Turf" on! Great idea Colm!
We then went on for some drinks in Searle Lane (http://www.searlelane.co.nz/). It was nothing crazy afor me as I knew we were up early for the airport. Some of the others were more hardcore than me and got in a couple of hours before we had to go - and still had to pack. Johnny was number one culprit - but considering he forgot to pack most of his stuff in the first place, it wasn't too difficult to pack for the trip home! 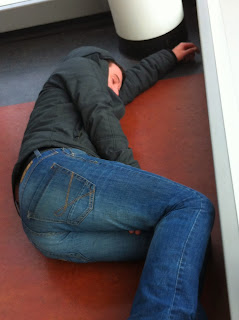 Reunion dinner in Patee Thai on Chapel (http://www.pateethai.com.au/patee-thai-prahran) where the novelty is to sit on the floor and the food is lovely! Cheap meals and BYO - you couldn't go wrong! Great bunch of people who got along well on the holiday and were now all friends, mixing different groups that wouldn't have normally. 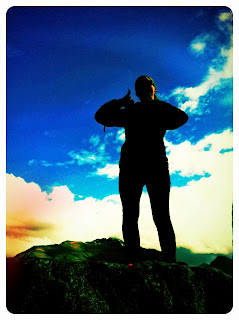 Rumour is Vegas next year...