Time for a Plasma Donation.

I've only donated whole blood two or three times since coming here and plasma once before; mainly because appointments are so hard to get! (http://www.donateblood.com.au/) Talk about an amazing set-up, with top-notch centres and all the food and drinks you can want! The staff are lovely and friendly and always put everyone at ease. However, I find that is it so hard trying to book appointments for 2 people together, after work in a local centre. I go with a mate to Caulfield or Southbank Centres and ideally could donate Plasma every 2 weeks and whole blood every 3 months, but trying to get a time slot is harder than it looks!

This time it's in SouthBank and we arrive in plenty of time. My mate says he's hungry, which isn't the best way to go into a donation, but insists that he has hydrated enough to go ahead. We go in and check-in, filling in our questionnaires about us having never slept with prostitutes , injected drugs or been in prison etc. We have a quick 10 min interview with a nurse who tests your blood pressure, blood levels, weight etc & goes through the questionnaire with you. Then out to a chair where you get hooked up to a machine that looks like you're on dialysis or something, and off you go! It generally doesn't take too long, and we often "race" each other in trying to see who can donate the quickest. Well I never said I was mature...

This time however, I was looking at my mate who was saying that his donation was going very slow and the nurses kept coming back over and trying to mess with the needle. Cue my 6ft mate turning yellow, then white and then having to lie back on the chair as he was about to pass out. I normally would probably have taken a photo of the scene; with him legs up in the air and no shoes on, with two nurses at his side, fanning him! I know, however, how horrible it feels to pass out and how there's nothing you can do about it. Poor thing - I felt so sorry for him as you can feel so sick from an experience like that. His shirt was soaked with sweat and that was his donation over.
After I had finished and he had rested for enough time, I told him off for not having eaten and we went to the canteen for food. 4 sausage rolls, 2 Mars bars, some cheese, a strawberry milk and an Iced Chocolate later he was feeling fine! :) 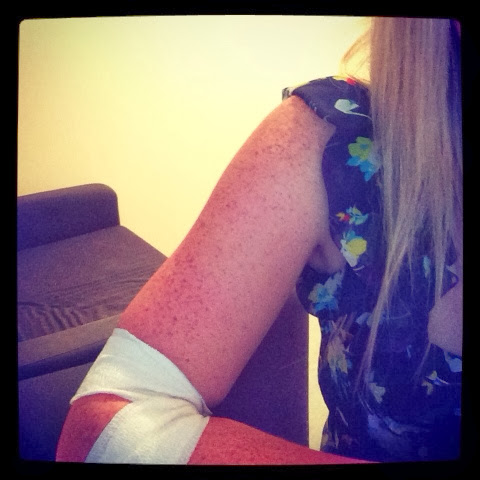