A year in Aussie-land

How fast a year goes by and how things change.
This time last year we were starting on this adventure with 23kgs each and each other. Now we were surrounded with a group of friends and were feeling like this was a second home.
Paul came home to Melbourne from Ireland with a completely different view. No longer would he be homesick thinking of how things were at home. He was now grateful for the opportunities and facilities that we had here in Melbourne. He told me of how life at home was depressing, sad, dark and non-existent. Everyone appeared to have lost their fight and their drive; lost the will and ability to live life for what it's meant to be lived.
On this new high of appreciation and gratitude, he joined St. Kilda Celts Football Club (soccer) to meet people. Again, it appears that the best way to make friends over here is through drink, work or sport. I was lucky to have such a selection of nationalities in my Hockey Club to make friends with; however, I found that most Irish over here are friends with Irish and Irish only. This could be due to location (St. Kilda being pretty much Ireland), the fact that most sports that we play are Irish anyway (so therefore are going to mainly have Irish people at them) and also due to many Aussies already having their groups of friends and being happy enough to not want any more. The pubs are mainly filled with Irish and English, German and French and you're often hard-pressed to find an Aussie amongst the sea of European Backpackers!

Within the year we have had to deal with having Bed-Bugs not once but TWICE! EWWWWW!! These disgusting creatures are widespread throughout Melbourne; probably due to the never-ending backpacker traffic. I was eaten alive, but Paul was left untouched. They leave you with red dot-like bites that can come up over the course of the day. I had them all over my back, on my hands and on my legs. When we pulled up the mattress of the bed we could see that it was infested!! We had them in our couches after we got them from someone on @Gumtree, and so they spread to our bed. That was the last time we bought any furniture from there; only because you never know who had them before you or if they had them or not. You have to wash and dry ALL of your clothes afterwards, steam-clean the carpets and walls etc; and absolute nightmare!! 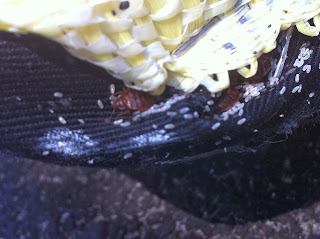