A birthday to remember!

My husband Paul turns 30 and would be happy enough to have spent it asleep on the couch as he would spend most days after work. But nooooooo.....Ciara is here to spice things up a bit! I decide to organise a surprise birthday party in "29th Apartment" on Fitzroy St (http://www.29thapartment.com.au/). I set up the Facebook event (of course), and invite everyone I can possibly think of that is in Australia. I had to stop myself from making friends just so I could invite them to the night out! I wanted to make sure that he had a birthday to remember and could see that he had friends in this country so far removed from home.
The day came and a few questions flew my way about why I was wearing this, or dressing up like that etc. His birthday is on Valentine's Day, so I managed to get away with it by using the excuse that we were going out to dinner in "Phamish" in St. Kilda (http://phamish.com.au/). Lovely atmosphere and friendly staff. A couple of photos and "Check-in's" later and we're off to the surprise. The bouncer at the door of "29th Apartment" asks Paul for ID, just as we're going in the door. 2 metres away from the bouncer are about 30 people waiting to shout "SURPRISE!", but afraid to breathe at the same time, in case Paul should lift his head and see them. All is saved, he's very surprised and the party continues to 5am in the morning when we leave "Robarta" on Fitzroy St (http://www.robarta.com.au/) and stumble home. 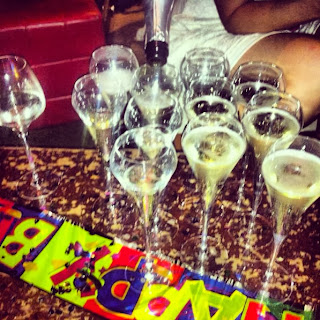 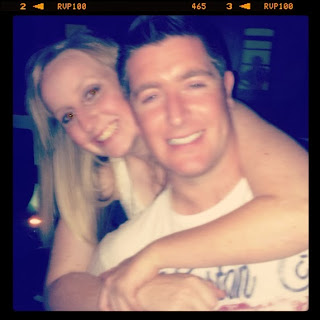 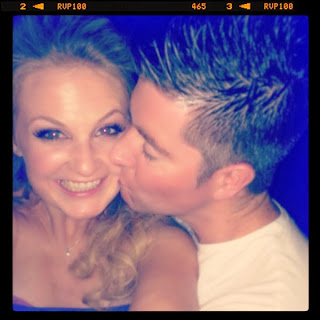 His presents include money towards new customised golf clubs, vouchers, clothes and I got him a Great White Shark Dive in Port Lincoln, SA through Calipso (http://www.sharkcagediving.com.au/). What an amazing adventure! One that everyone should put on their Bucket List!

Paul and I head off to Adelaide on the plane with two friends Conor and Devon. We arrive in Adelaide to get a hire car and start the 9 hour drive to Port Lincoln. We decide against paying the extra to get the insurance in case of an accident. 2 mins later we almost crash leaving the car park space in the airport. 5 seconds goes by before everyone starts laughing with nerves! Maybe that was a sign?!
Nevertheless we continue on the roadtrip; stopping only to eat at Maccas, Subway or some other "healthy" food enterprise. We arrive at the Port Lincoln Hotel (http://www.portlincolnhotel.com.au/) where they have a deal with Calipso Charters. An expensive weekend, costing about $2500 in total (car hire, accommodation, flights and 2 dives) for the pair of us, but well worth it! An experience I will never forget in my lifetime. Was glad I paid the extra when I saw other boat companies who weren't allowed to use "chum" (to entice sharks to the boat), and these weren't seeing any sharks. Their boats also looked a lot smaller and more uncomfortable.
Once checked into the hotel we met with Conor and Devon for pizza and then headed to bed for 10pm as we were up at 5:30am on the Saturday morning to set off looking for Jaws and his mates. 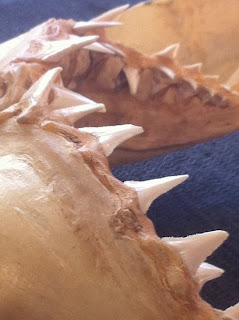 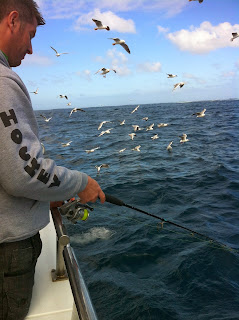 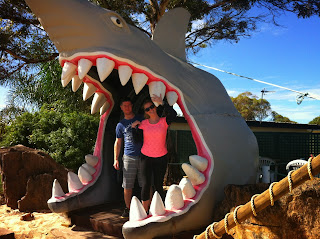 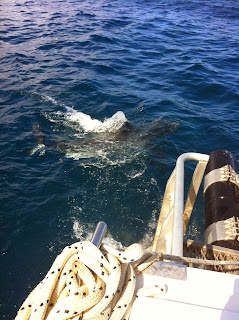 Next morning, well wrapped up, we hit the sea in a big way. Most of the passengers on board (Devon included) and crew were seasick due to the size of the swell. I had to wrap my legs around a pole while sitting on the floor of the top deck, with Paul holding onto me to make sure I didn't fall overboard when I was taking photos of the wild dolphins - such a surreal experience to see them jumping out of the water beside the boat! 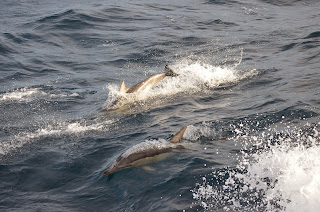 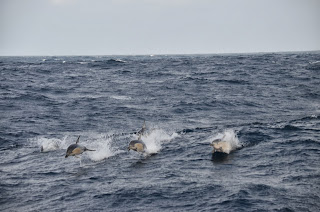 We anchor at the Neptune Islands and within an hour, when everyone is inside the boat looking at the underwater monitor; a soulless, glassy eye glides by the screen and everyone nearly loses their lives in excitement and run outside to see if they can catch a glimpse of the beast. We were unlucky on day 1; you go underwater in groups of 4, and our group didn't see any Great Whites. The 3 weeks previous no Great Whites were seen at all, so we were hoping and praying that our expensive weekend wouldn't be in vain. You get the following dive for half-price if you don't see Jaws, so we decided to go for broke and attempt day 2. The Calipso Team were lovely - friendly, approachable and informative. All food and drink on board was included in your dive price and the day passed quickly. We were back on land about 7pm, where we went to bed again for as much sleep as we could manage before having to do it all again the next day.
Day 2 was much more productive. Within seconds of anchoring, we saw a Great White circling the boat. We were the first four in the water, as we had been cheated of a glimpse the day before, and we spent a good 20 mins in the water. I cannot describe the sheer size and presence the Great White Shark has underwater. We saw three or four of them; one of which was easily 4m long and the same girth as a car! They glide through the water watching you and come so close and so calmly to the cage that you want to just stick your hand out to touch them. Amazing creatures but so evil looking. All four of us stopped breathing when we caught the first sighting of the predator, and as soon as he passed by we were high-fiving each other and taking photos! Definitely worth the second trip and all the money! 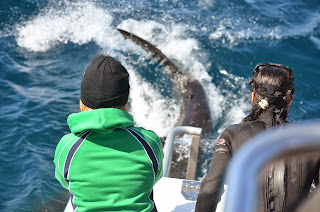 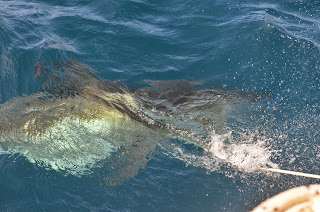 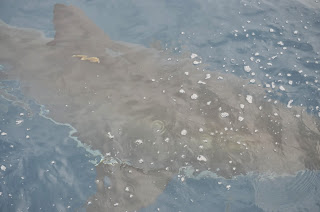 The four exhausted travellers headed back to land happy campers, only to have messages on our phones from people panicking about people shark-diving in SA when the Great White got into the cage. The "SA" in this case was actually South Africa, but it was funny to hear - especially AFTER the dive and not before! We did the 9 hour trip back to Adelaide the next morning, followed by the flight home. Nothing much else to note about Adelaide; nothing appeared to be open and it was quite dead. I hear from most that the best thing about there is the wineries, so I think I'll leave that and stick to my thrill-seeking for now :)