Farewell - somebody's going to miss you...

So...how do you even start one of these? It was suggested to me by numerous friends that I start a blog. I'm not sure if it's due to the number of random things that happen to me on a regular basis, the fact that I am obsessed by social media, you can read me like a book or simply to give me something to do to keep my mouth shut...but I'm going to give it a go anyway and see how we do.

Sun Jan 8th 2012 and I'm having to emigrate to Australia with my husband Paul at the age of 29. Something that we never had in our plans, something that I never envisioned myself doing (and not just cos of the fact that I'm arachnophobic!), yet something that was now very real. Probably one of the most upsetting experiences I've had to do was having to say goodbye to everyone. The decision to leave was forced upon us by the fact that Ireland was in a recession and that we were struggling to make ends meet and keep our house. We left within 10 weeks of making the decision, so it was a whirlwind of preparation, organisation, saving, laughter and fun times, tears and farewells. We met with as many people as possible before leaving and some close friends called over to the house the day we were leaving. It's funny, because you see who your real friends are in times like this and who made the effort to see you at some stage before you left. Those are the friendships that I will do all in my power to keep forever.
It was so upsetting to have to say bye to the friends and family you love, not knowing when you'll be back next and knowing that you're going to be on the other side of the world. The only way I can describe it was like attending your own wake!
With a quick change of plan my younger brother Kev dropped us to the airport (as he couldn't be any more laid back if he were lying down!), and then we were on our way...

23 hour flight which was made up of Paul sleeping for about 22 hours of it and me left tired and frustrated at the fact that I couldn't sleep and felt like I was in cargo-class. Watched a few films, took a sleeping tablet which didn't work (because it actually turned out to be an Immodium tablet that I had taken by mistake), ate til I was fit to burst and then finally Tues Jan 10th 2012 we were there. Dublin - London - Hong Kong - Melbourne. 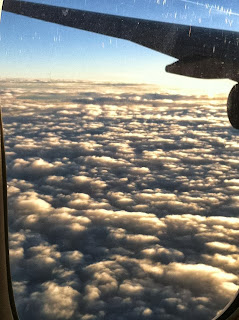 My younger sister Siobhan (AKA Bhany) picked us up from the airport, where we quickly figured our tracksuit bottoms and hoodies were not the correct attire for a 32 degree day. We went back with her in the "Ute" (a word used for all utility vehicles in Oz - basically what we call a "jeep") to Darraweit Guim and Skyped home to show Mam and Dad, Angela and Kevin (the in-laws) that we were safe and well and in a greenhouse of heat.
Bank account setup, driving licence appointments and recruitment agency appointments ensued for the rest of the week to get ourselves sorted. Money was bleeding from the account, where we quickly realised that Australia was not a cheap place to live. Not to mention their ridiculously large and heavy 50c coins and the fact that they don't have a 1c or 2c coin, but will price items at $4.96 or $9.98 etc. Go figure?! I spent the first week petrified of seeing the man-eating sized spiders I'd heard all about and could barely sleep. I was checking every corner, would get Bhany or Paul to check in the wardrobes and under the sheets before I went to bed, just in case. Apparently it wasn't that common to see the big spiders and I was over-reacting...
By day 10 I met Mr. Huntsman. For those who have yet to get acquainted with Mr. H; just picture a MASSIVE black and hairy spider (which can have a leg-span of 12 inches!), which can run fast and JUMP. My nightmare was on the kitchen ceiling staring at me from across the room. I was ready to book my one-way ticket home at that second. Paul came to the rescue as I bawled my eyes out from under the bed-covers; later confessing that he hit it with the sweeping brush and legged it!

First Aussie BBQ was on Jan 26th. And I don't know where they were putting all the Aussie sun, cos Melbourne most certainly doesn't get it!!! I spent a lot of the month in my trackkie bottoms and a hoody! We made the BBQ outside and ended up having to go inside as it was so cold. 10 mins later it was hail-stoning outside!! 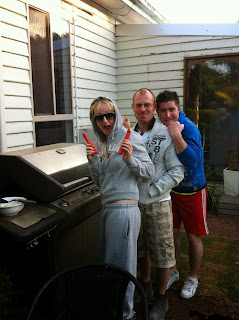 Then came the mice.
Now, mice are to Paul what spiders are to me. I am only grateful that I only met Mr. H once in Bhany's house. There was, however, an infestation of mice. It ended up at one stage that I was lying in my bed with 8 mice running around me on the floor and Paul on the couch staying awake during the night and sleeping during the day to avoid them! One of the cheeky things even made it's way onto the foot of the bed, right by my foot when I realised and gave a swift kick onto the floor. It was time to do something now! Turns out rat poison isn't the best as they eat it and then die in the walls of the house, thus rotting and getting the last revenge as they stink out the house in the summer heat. The mouse trap scared me too much to use it, so I tried an old-wives method; peppermint oil, and never saw another one again! My room smelled like a tube of "Mr. Soft" sweets (or "lollies" according to the Aussies), but no more Mickey and Minnie. Paul had, however, already had enough and had moved out of Bhany and Luke's house and was now sleeping on his best mate Johnny's couch in Balaclava, Melbourne and doing the dishes for rent :) 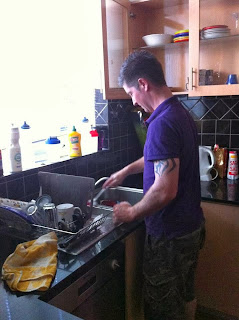 By Feb 15th we had bought "The Beast" (1993 Toyota Camry Executive) and I had managed to crash it into a sign, narrowly avoiding killing myself in the process. I still maintain the massive dent in the left hand side of the car adds character to her. She'd be boring without it...
Oh, and we told Mam and Dad that Paul did it...so, if you're reading this folks - sorry! :) 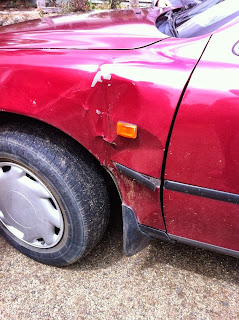 I had also started working on Chapel Street and so we got a small 1-bed-apartment on Pakington Street in St. Kilda. Paul was working at a plasterer for an Irish guy and so our Aussie life began... 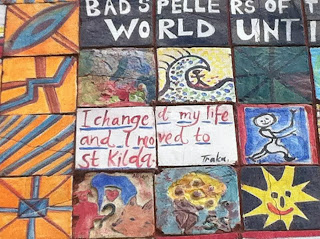